A policeman identified as PO2 G.P. Jalandoni is being praised on social media after a netizen posted his “Good Samaritan” story on Facebook.

According to netizen Celine Anne Giguera Hugo, she noticed PO2 Jalandoni counting money so he could buy a vial of anti-rabies medication worth P1200 for the old lady she first thought was his mother or relative. After asking the others in the hospital waiting room at the public hospital in San Lazaro, Manila, she learned that the policeman was not the old woman’s relative but just a person who took pity on the beggar who was bitten by a stray dog.

Even knowing that this old beggar would never be able to repay him, PO2 Jalandoni went out of his way to buy the medication for her, anyway. The good deed would have gone unnoticed had Hugo not seen the transaction and shared it on social media. Clearly, this policeman did not do it so others would praise him but really just out of the kindness of his heart.

Hugo also noted that there was another Good Samaritan, the guy in red in the picture, who also shared some of his money for the old lady.

Someone from the Philippine National Police (PNP) took a screenshot of Hugo’s post and shared it on the agency’s Facebook page. This quickly went viral, gaining over 18,220 shares and close to 87,500 likes after it was first posted by PNP on June 5, 2015. 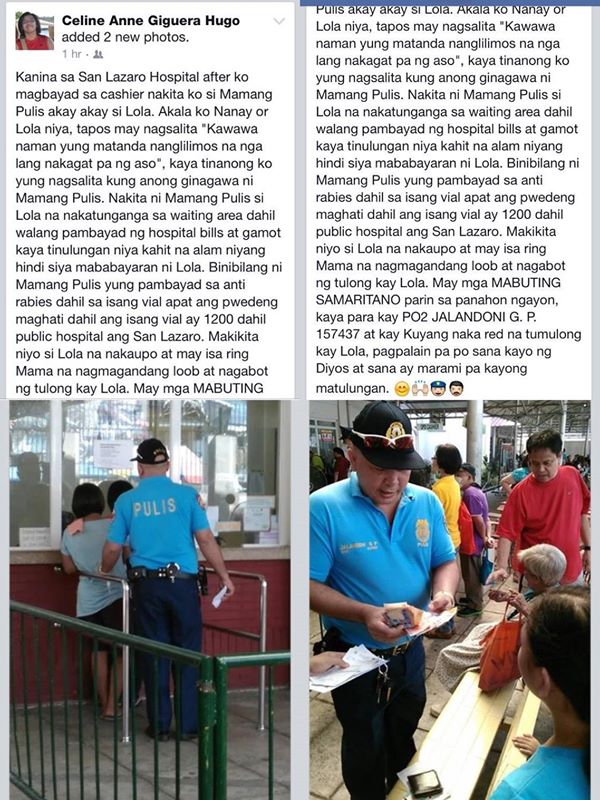 With so many negative stories circulating about our country’s police officers and other uniformed personnel, it is nice to hear stories like those of PO2 Jalandoni.

We salute you, PO2 Jalandoni!

Rabies is a deadly viral disease caused by the bite of animal, usually a dog or a cat. Depending on several factors, this disease can kill the patient within days after he/she was bitten; though there have been medical reports of people dying from rabies years after the actual bite had taken place.

With the virus targeting the brain, rabies is certainly deadly. Thankfully, anti-rabies vaccine has been around for decades, first actively used in 1967.

In most cases, the vaccine is given to those who have already been bitten by an animal but the dog vaccine developed in Dumaguete is injected to dogs even before it had bitten someone. This resulted in the elimination of rabies in several areas of Visayas and Mindanao where the dog vaccines were distributed.