An old taxi driver asked help from Raffy Tulfo in Action because he was charged Php150,000 ($3,000) by a police precinct so he could get back his taxi getting in an accident involving a colonel assigned at that station.

The taxi driven by Felipe Rebadomia hit a bus; his colonel passenger sustained some injuries. It is unknown what injuries the colonel actually sustained from the accident but the damage on the taxi does not look like it caused major damage on the bus or its passengers.

But aside from paying for the damages sustained by his taxi and the bus, Rebadomia had trouble coming up with the amount the colonels’ assistants were asking before his vehicle can be released. After all, how could he even start to earn the money if his taxi was impounded?

So, he went to Tulfo’s show with Cynthia Lumbad, the owner of the taxi he is driving. 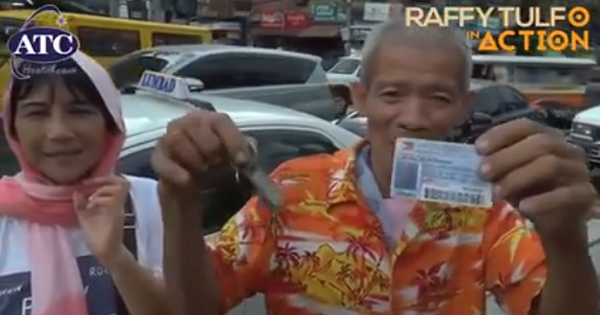 He told Tulfo that they are being asked the huge amount so he could claim the taxi but the veteran broadcaster knew that in cases like this one where he didn’t directly hit the colonel or any other passenger and no one died or had major injuries in the accident, the vehicle doesn’t have to be impounded.

Tulfo spoke with SPO1 Salani Radjail, a Mandaluyong Traffic Investigator assigned at the station where Rebadomia’s taxi is impounded. Within a few seconds after talking with Tulfo, Radjail immediately agreed to release the taxi at no cost to the taxi driver.

Rebadomia would still be facing the charges that the colonel might file for the injuries he sustained in the accident but at least the taxi has been released without the hefty fine. Thanks to Tulfo!

Watch how the matter was resolved here: