By now, you are definitely aware that Canadian Prime Minister Justin Trudeau is such a charmer. Armed with good looks, sex appeal and political prowess, Trudeau seems to possess what most women want in men.

In his recent viral photo showing off his awesome balancing skills, Trudeau just proved to the people of the Internet that he has much more to offer. The 2013 photo showing the gorgeous prime minister doing a gravity-defying yoga pose on his desk has resurfaced online after Toronto-based yoga instructor David Gellineau shared the image on Facebook. 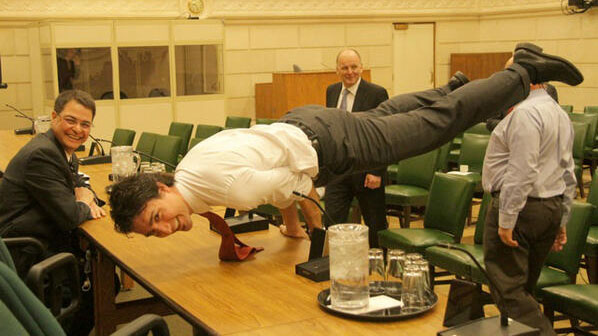 His passion for yoga came as no surprise as it apparently runs in the family. In his interview with CBC in 2013, Trudeau talked about a photo of his father Pierre Trudeau doing the same pose in 1970. According to Trudeau, he could also do the same stunt.

“Not on the floor, but I do it on railings and on the edge of tables, and stuff. I used to do it an awful lot when I was younger. Now that I’ve hit 40, I’m not quite as able to do it as I used to be,” Trudeau revealed.

Trudeau and his wife Sophie Grégoire Trudeau, who happens to be a yoga instructor, were often seen doing yoga exercises in the past. Following a news conference in June 2013, the couple was spotted striking a yoga pose on the front lawn of Parliament Hill in Ottawa.

A physical, spiritual and mental practice that originally came from India, yoga is an umbrella term that includes religion, practices and philosophy. Hatha yoga and Raja yoga are some of the most popular types of yoga.