This is what 27-year-old John Angelo Ortizo told Pope Francis when he had the chance to meet him at the Mall of Asia Arena on Friday, January 16.

Ortiz, a cross-stitch hobbyist with cerebral palsy from Albay, was among the lucky Filipinos who attended the pontiff’s “Encounter with Families”. He was able to personally give his gift, a cross-stitched image of Mama Mary, to Pope Francis.

Because of his condition, he made the cross-stitch image using his feet.

According to Ortiz’ father, Angelo learned the craft from his cousin who is also a hobbyist. Ortiz sells his works, which are mostly religious images, and uses his income to replenish his craft supplies.

Aside from making cross-stitched products, Ortiz intended to study animation before. ANC host Tina Monzon-Palma mentioned that there’s a good animation school located in Naga. However, Ortiz said that he needs assistance when travelling to Naga. 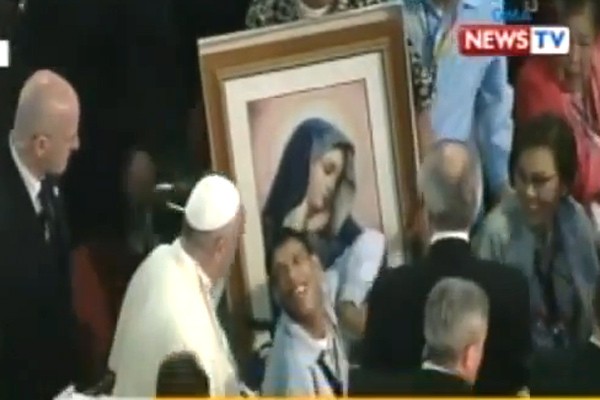 What is Cerebral Palsy?

Cerebral palsy pertains to the group of chronic disorders that weakens movement due to damage to the developing brain, according to Web MD.

A non-progressive brain disorder, it usually manifests and develops by the age of 2 or 3. Symptoms of the disorder may include motor difficulties, swallowing disorders, some level of mental retardation, a related seizure disorder, as well as speech, vision, hearing, and language problems.

The disorder is caused by brain injury during the baby’s development inside the mother’s womb. Infections during pregnancy, severe jaundice, trauma during birthing process, and severe jaundice are some of the possible causes of cerebral palsy.