Home
Entertainment
Pinay Pixar Animator Is the Creator of “Dory”

People of all ages, from all walks of life have grown to love the adorable characters in Pixar films like Toy Story, Monster’s Inc., The Incredibles, A Bug’s Life, Up, Brave and Finding Nemo.

But unknown to many Filipinos, the animator behind the famous characters such as Woody and Jesse the Cowgirl in Toy Story, Elasti Girl in The Incredibles, Mike and Sulley in Monster’s Inc., and Dory in Finding Nemo is Virginia “Gini” Cruz Santos, a Filipina graduate of the University of Santo Tomas. 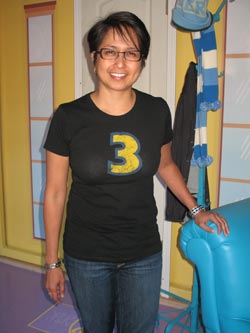 Born in Pasig City, Santos and her family moved to Guam, where she finished her elementary education, when she was three. They eventually returned to the Philippines where Gini received her high school diploma at St. Scholastica’s College and Fine Arts degree at the University of Santo Tomas.

After working as an art director for an American advertising agency, Santos resigned because she felt that her job was holding her back artistically. She then moved to New York to pursue a Masters program of Computer Arts from the School of Visual Arts.

But it was in 1996 that Santos’ career in animation launched. According to Santos, she submitted a sample of her work The Eclipse, which looked at human relationships, “just for the fun of it” to Pixar Studios. She even failed to include her resume and cover letter in the application.

Santos was eventually hired to work on her first project, Toy Story 2.

Her hard work paid off and soon, Santos received praises for her detailed life-like animation of Dory, the forgetful blue tang fish in the 2003 Disney film Finding Nemo and the star of the upcoming film Finding Dory. In her past interview, Santos said that Dory is one of her all-time favorite Pixar characters.

With so much passion for her job at Pixar, Santos and fellow Filipino Pixar animator Ronnie Del Carmen hope to hold an animation convention in the Philippines in the future.

“We want to gather all the talented and interested Pilipino animators in the Philippines and hold an animation convention. We would love to invite some big name animators from Pixar and Disney to go over there so that the Pilipinos will see the latest technologies and styles that we use,” she said.