When Jonathan Chase chanced upon a dinosaur being hauled on a trailer truck, he took photos and posted them on Facebook with a rather witty caption. Aiming to be funny without really revealing the punch line, he wrote this:

This is an outrage. This beautiful, endangered Tyrannosaurus Rex was bound to a trailer, unable to move for 30hrs. This is animal cruelty, at its worst. The perpetrators of this horrible act should be fined, and their rights to own exotic and domestic animals should be stripped from them.

Please help me raise awareness about this heinous injustice. Dinosaurs are animals too, and they deserve our love and care. How would you feel if you were bound to the back of a truck for 30hrs?

Share this photo and help bring a stop to cruelty towards our beloved Jurassic friends. 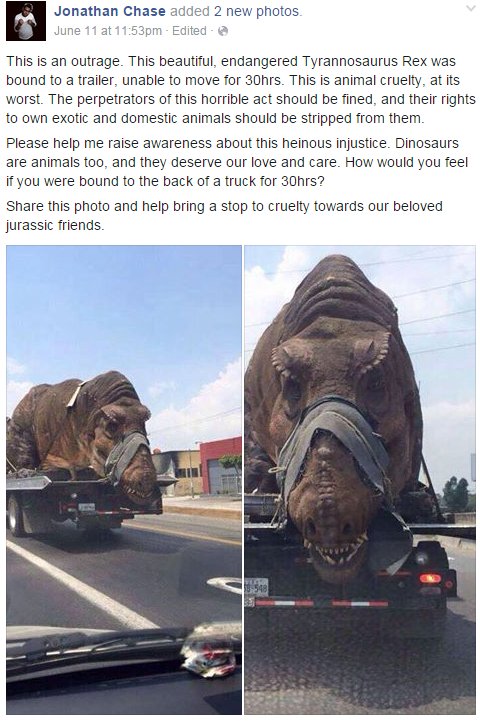 Did you get the joke? It is funny, right? However, as The DailyPedia pointed out, a lot of netizens just did not get the joke and could not understand why Chase posted a photo of a dinosaur, thinking it was for real.

The photos soon sparked a massive debate, with people putting in their opinions – ranging from how stupid Chase was for believing dinosaurs are real to explaining to Chase that dinosaurs have been extinct. Some were laughing after realizing the joke while others laughed at the “stupid” commenters who were trying to educate Chase about the existence of dinosaurs. There were also others who asked whether the photo was for real.

It is amazing how people fell for the joke – but more amazing that thousands of people just did not get the joke. Chase was hit for being stupid to believe that the T-rex he pictured bound for 30 hours had been real when, if you really read his caption, you would understand that he was delivering a joke with a straight face.

Of course, there were many people who got the joke and commented witty remarks about freeing the dinosaurs, taking one as pet, etc. They also crafted witty comebacks for those who were too serious to understand Chase’s post.

Irony or sarcasm in writing has long been employed in literature. In fact, according to How Stuff Works, great writers such as Mark Twain, William Shakespeare, and Geoffrey Chaucer have employed the technique in various works. French philosopher Voltaire was also know to use sarcasm to prove his point or to disprove others.

The same article reveals, however, that “Sarcasm is often even less understood in online communication.” This holds true – just like the story of Chase’s dinosaur post. Many online readers often take what they read at face value, without realizing that the author had been using irony in the post.

The article perfectly sums it all up by repeating the axiom, “Sarcasm is the lowest form of wit, but the highest form of intelligence.”