How much do you receive each pay day? While the answer, of course, varies depending on a lot of factors such as what type of work you do, your position in the company, your bonuses and deductions, etc., there are certain things that make one’s salary higher than another.

For example, professionals are often expected to have a higher salary than blue collar workers working in the same place (such as an accountant versus a janitor working in Metro Manila) but a recent viral post shared on various local blogs in the Philippines showed concrete proof that this is not always the case.

In this post, a staff nurse receives just Php2,860 ($59) for working in a period of 11 days – and that’s definitely lower than the minimum wage, assuming this nurse works somewhere in Luzon or Metro Manila! 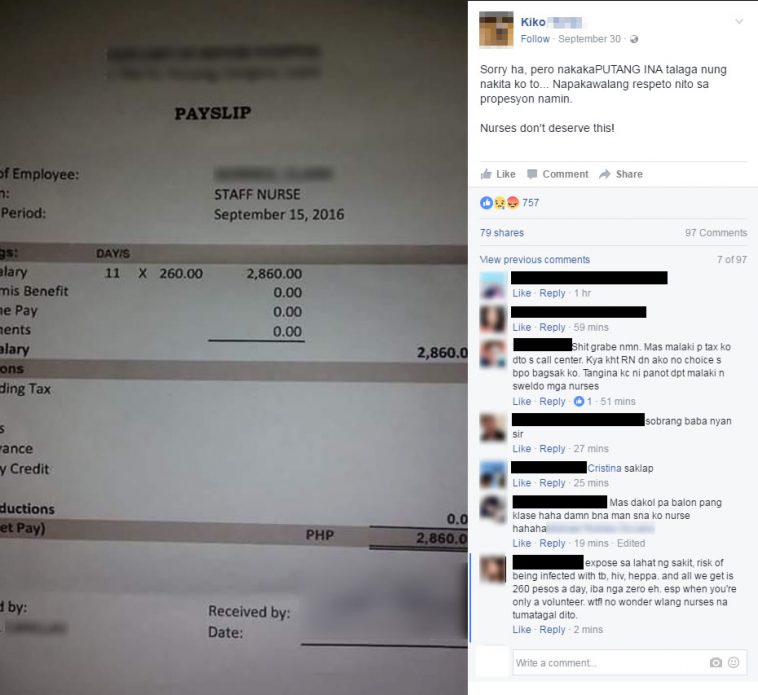 According to the National Wages and Productivity Commission, the salary of a person working in a non-agriculture sector/industry, including private hospitals with bed capacity of 100 or less, should be Php491 ($10) per day but the nurse whose payslip went viral only received Php260 ($5) per day!

Considering that BS Nursing is one of the most expensive and most difficult courses in college, you would think that they would also be among the highest paid employees yet the nurse’s payslip above shows that this is definitely not the case.

Amazingly, this nurse could even be considered luckier than many of her counterparts across the country! There are many who are actually the ones who pay the hospital to let them ‘volunteer’ so they can earn work hours that could help them land a job abroad!