Twitter user Servant Rules (@borgyborgonia1) shared supposed photos of Panelo dining with Arroyo during her 69th birthday celebration in her home in La Vista in Quezon City on April 5. The Supreme Court previously granted Arroyo’s request to return her home for her birthday. The representative of the Second District of Pampanga who is seeking reelection was allowed to spend 3 days in her residence from April 4 to April 6.

Panelo allegedly wrote in the caption of the photos: “Taken during the birthday bash of a celebrated friend in her La Vista home with volunteer ladies for Mayor Duterte on April 5.” 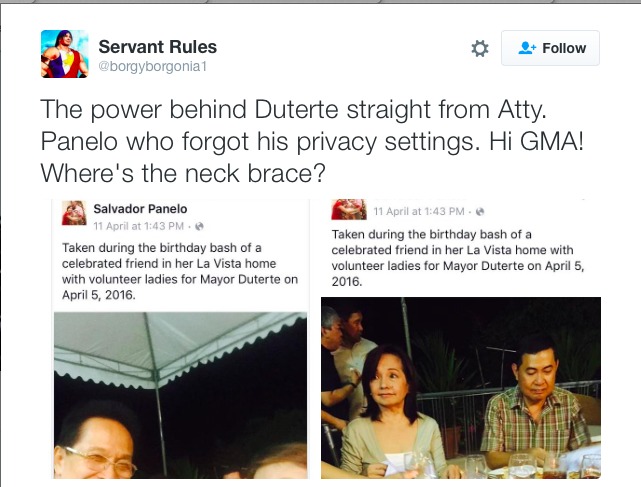 Arroyo, who is currently in hospital detention at the Veterans Memorial Medical Center (VMMC) in Quezon City, was arrested in 2012 for alleged election fraud and involvement in the misuse of P366-million Philippine Charity Sweepstakes Office (PCSO) intelligence funds from 2008 to 2010.

Although Duterte previously served as Arroyo’s presidential consultant on public order in her administration, there is still no word if the former president supports the tough talking mayor’s presidential bid.

Several allies of Arroyo claimed that she is supporting the candidacy of Vice President Jejomar Binay.

In an interview with RAPPLER in March, former Quezon congressman Danilo Suarez said: “There is no formal proclamation yet, but minus the formal proclamation, the marching order of the former president is to help the Vice President.”

Duterte earlier promised the people of San Fernando, Pampanga last February that he would release Arroyo from detention if he wins the presidential election. According to him, the evidence against the former president is weak.

“If I am elected President, I will release her. Why? Because the evidence [against her] is weak. I know that. I am a lawyer,” Duterte announced in a gathering of the group of Friends of Rody Duterte.