Everyone knows that babies have very delicate skin that is prone to scratching and getting wounds from their sharp nails. This is the reason why parents wrap the babies’ hands in mittens to keep the sharp nails from accidentally scratching the eyes and other parts of the baby’s soft body.

So, it was with much outrage that netizens express their sentiments over photos of a baby with sharp, claw-like nails.

While the person behind daily_earthpix did not confirm whether this was the hand of a real baby and if the nails were actually clipped on there or just photoshopped, a lot of netizens were simply outraged that whoever this person was had no thought about the baby’s safety, assuming this was actually for real. 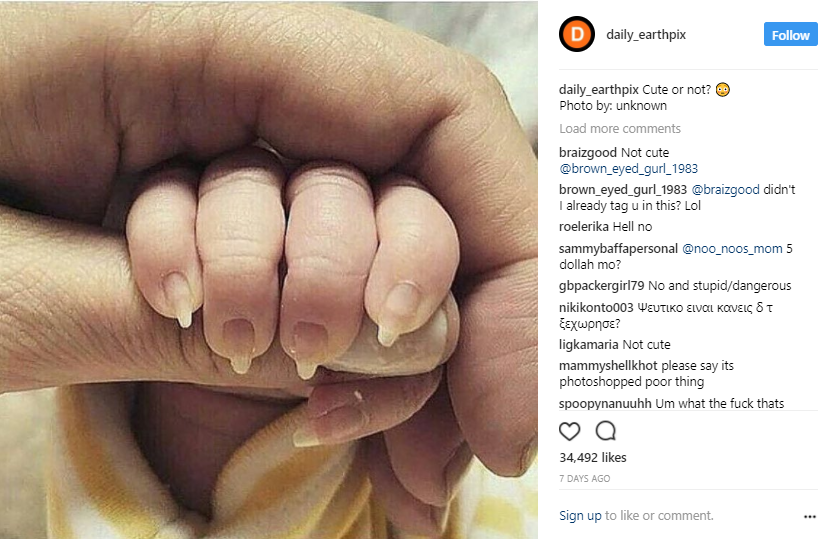 The person behind the photo did achieve the dream of becoming viral, albeit the negative nature of the viral post and the overwhelming angry response it received.

Thousands of netizens commented on the photo, expressing concern over the child’s well-being and telling its parents to immediately cut this baby’s nails before any permanent damage might be done to the child’s eyes and skin.

With these many comments, not one or perhaps only just a handful was amused by the picture. Everyone found it disgusting for a child to have such sharp nails.

While we could easily agree that parents know what is best for their babies and should be allowed to do things on their own, we make an exception for this one. No, the nails aren’t cute – they look dangerous!

So, if you are trying to catch the world’s attention with your baby’s photos, do it in the cute way and not in something that could actually harm the kid!