The ‘bayanihan’ spirit is still alive! This is proven by some passengers who shared their baggage allowance to soldiers who were bound for Mindanao, two of whom were going to war-stricken Marawi City.

Facebook user Inday Rakel shares the story of how she encountered three soldiers having a difficult time with their luggage allowance as they were checking in for flight no. Z2615 of AirAsia, bound for Davao City last July 18.

While the staff handling the matter did her best to accommodate the soldiers without breaking the airline’s protocol, the soldiers still had 7kg of luggage in excess but understandably not much money to cover the extra fees.

Someone suggested that the soldiers put some of the luggage on cargo which is cheaper than the fee for excess baggage but they admitted they couldn’t do that because the two were headed to Marawi while the other one was going to Cotabato. 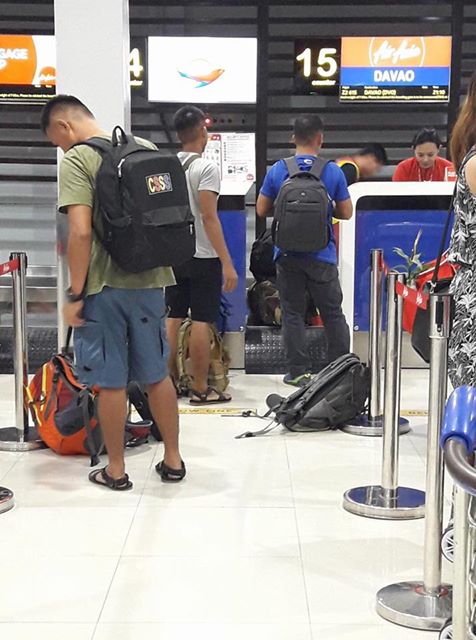 Seeing that most of their luggage were uniforms and the like, Rakel thought of going to the airline’s supervisor to ask that the soldiers be given extra luggage allowance. But even before she found a supervisor, she noticed that the other passengers have stepped in to help the soldiers.

Several people offered to share their baggage allowance with the soldiers so the lads don’t have to shell out cash for their excess! Touched by this gesture, Rakel also shared 2kg of her remaining allowance.

I am blessed to somehow help them with their luggage, and that was a little thank you for the bigger job they are doing. But, we are even blessed to have these men who are ready to die for our freedom, for our land.

Even if they were so called “men in uniform”, they remained humble and followed simple airline rules. True heroes not just in war, but as an abiding citizens. Filipino citizens who deserve better at least for an extra few luggage weight.

Cheers to our heroes! Our soldiers!

She also called on the airline to give a little consideration to soldiers, especially they make a sacrifice for the country.

Hours after her post went viral, AirAsia made a touching gesture by announcing that they will provide free baggage allowance of up to 40kg and will also provide free in-flight meals and snacks to all AFP military personnel who are on peace-keeping missions. They only have to present their mission order and present a valid ID. 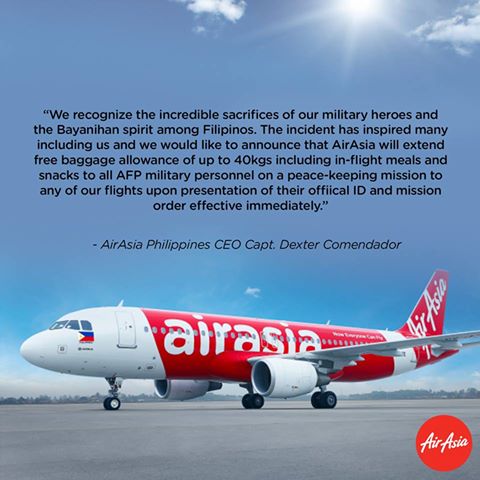