A parking attendant named Berto is being praised for his honesty. He was arranging motorcyles in the parking spots somewhere in the downtown area of Dumaguete City, Negros Oriental last June 19, 2015 when he found an iPhone 5s.

Poor as he is, he could have traded the phone or used it, perhaps, but this honest guy did something that has earned him the respect of the people of Dumaguete and other netizens. He immediately sought the help of some locals so he could return the phone to its rightful owner.

So, Don Shemu’el Sam posted his story on local trading group on Facebook, Bid for Me. Although most of those who commented on the photo did not know the phone’s owner, they were all praises for this honest guy who was revealed to be also quite courteous as many of the locals said he would greet them nicely and bid them a safe trip after he brings them their motorcycles.

What a wonderful guy! There should be many who are like him. Even if he was poor, he did not let that be the reason to take anything that was not his. 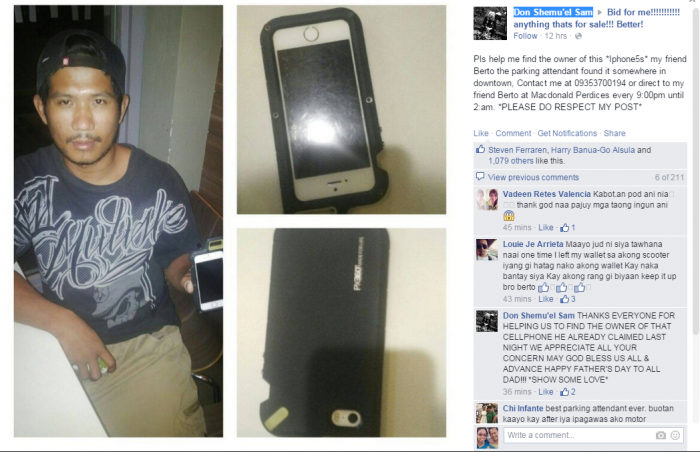 According to an update he made on the post, the phone’s owner has already claimed the phone from Berto.

God bless you both for being honest citizens.

First released on September 20, 2013, the iPhone 5s is certainly not the latest iPhone on the market these days but it continues to have a strong market base, especially in those who want to own an iPhone but are not willing to shell out a few extra bucks for the latest models.

This line was succeeded by both the iPhone 6 and the iPhone 6 Plus which were both launched on September 19, 2014.