There have been so many cases of unattended babies drowning in the pool that a Chinese couple thought they could keep their child safe by leaving it in the locker, instead! Didn’t they know the baby could have also died from suffocation inside that locker? Crazy parents!

Shocking footage taken at the public bathhouse in China shows workers looking shocked after they rescued a baby who was left inside the locker by its parents.

It is unknown whether the child was male or female but it was clear that it was terrified; however, despite crying its heart out, the child appears to show no signs of suffocation. Perhaps the locker has some ventilation. 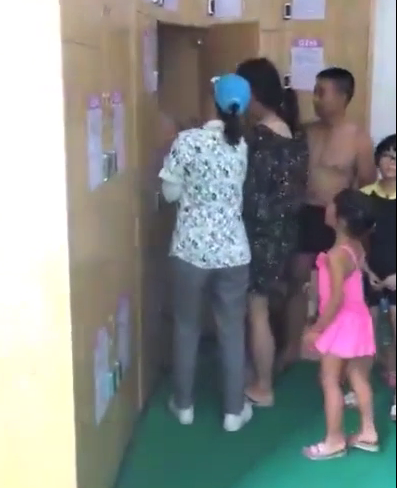 According to reports, several people who went inside the locker room were horrified to hear cries from inside the small locker. Some of them probably thought they were hearing a ghost or some poltergeist trying to scare them – after all, who in their right mind would leave a baby inside a locker, anyway?

But it seems that these parents are not in their right minds because they had no qualms in leaving the baby inside while they enjoyed a swim. Of course, it’s possible that they were afraid the child would get lost or might drown if they forgot about it but it was still quite crazy for them to even think of leaving it inside the locker!

Many netizens commented that these parents should be locked up in a small jail facility as well, as punishment for what they did to their child.

A lot also agreed that the child should be taken from them as it was apparent that both are not fit to become parents and that more harm could come to the child in the future because of their stupidity and carelessness!

A poltergeist is the term used for a ghost or supernatural being who is believed to be responsible for objects being thrown around as well as loud noises meant to scare people.