Several parents in India became their kids’ accomplices in cheating in exams.

What’s even more strange is that these parents even climbed the walls of school buildings just to help their kids cheat in a national exam which is equivalent to GCSEs.

In the eastern state of Bihar, parents as well as friends and families of Grade 10 students taking the exam were seen climbing more than five floors just to give notes through classrooms windows to examinees.

On Thursday, several photos and videos of people scaling the buildings spread like wildfire in India. 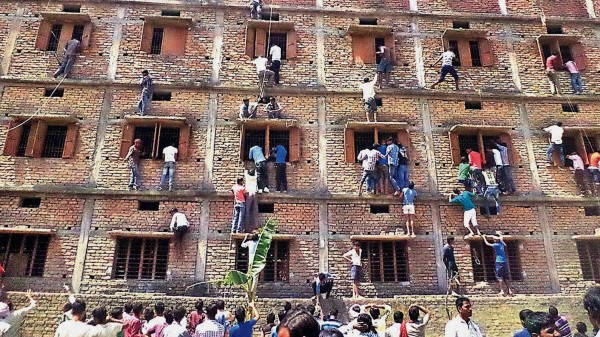 According to a report by Washington Post, cheating is not a new practice in India particularly in rural areas. This practice has become prevalent because of limited slots in college courses in schools across the country.

However, the government was completely shocked by the fact that parents were even willing to risk their lives just to help their children cheat.

In an interview with The Hindu, India’s Education Minister P.K. Shahi said: “First, I appeal to parents and guardians to stop cheating to help the government ensure free and fair exams.”

For Indian education experts, rampant cheating in the country is brought about by problems in India’s education system including focus on rote learning, lack of school infrastructure, and teacher absenteeism.

Study Finds  Top Students Also  in the US

Experts found that as cheating becomes more rampant in the US, it is also being practiced by top students including those studying in premier schools including Harvard and Air Force Academy.

According to the experts, the tolerance of schools as well as parents for cheating has encouraged more students, including the high achievers to do it.

Donald L. McGabe, a leading researcher in cheating told The New York Times: “There have always been struggling students who cheat to survive. But more and more, there are students at the top who cheat to thrive.”