After seeing an ad on OLX (an online marketplace in the Philippines similar to eBay) for a 2004 Mitsubishi Adventure Grandsports being sold for just Php210,000 ($4,390), Michael Dela Peña contacted the seller,  as he was very interested to purchase the vehicle. He haggled with the seller who later agreed to a final price of Php180,000 ($3,673).

The seller (whom Dela Peña described as someone who was possibly American or with an American accent, anyway) requested him to send a deposit of Php20,000 ($418) plus Php5,000 ($105) for gasoline since the vehicle had to be transported from Baguio City (Philippines), some 200+ kilometers away.

Dela Peña gladly sent the money via Western Union, then waited for the seller to arrive at the designated meeting place in Manila (Philippines) but he waited until midnight for nothing. The seller never arrived.

He coordinated with Western Union to trace the money. It turns out someone named Marlou Reyes Otengco withdrew the money not from Bacoor, Cavite (also in the Philippines). 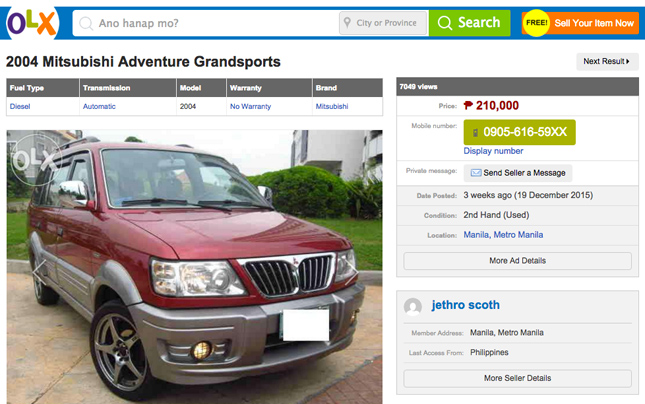 With his Php25,000 down the drain, Dela Peña asked Top Gear Magazine for advice on what he should do to get it back but was told that he could not do anything about it because there was no tangible proof of the merchandise. Plus, he made the payment via Western Union, not through banks; thus, he would surely have a difficult time getting that money from whomever it was who withdrew it.

Dela Peña might never get his money back but his story should serve a lesson for everyone to never readily put their trust on an online seller, especially when the items are being sold on consumer-to-consumer sales websites.

Buy only from trusted websites or directly from the brand, especially if purchasing expensive items like vehicles and real property.

As much as possible, do not pay via money remittance (pera padala) centers.

Do not disclose sensitive financial information such as the 3-digit security code at the back of your credit card unless you are sure your payment is being processed through a legitimate, secured site.