In protest against the terminal fee integration in airplane tickets, OFWs have changed their Facebook profile photos to black. The OFWs continue to protest the MIAA’s [Manila International Airport Authority] efforts to integrate the airport terminal fee worth P550 with the plane tickets because they believe this is a violation of their rights.

MIAA believes the OFW sector is but a smaller portion compared with the rest of the passengers who would benefit from the integration. However, the OFWs are fighting for their right – a right that is based on Republic Act No. 10022 which stipulated that they are exempted from paying travel taxes and airport fees.

The OFWs are entitled to a refund of the P550 terminal fee they automatically paid while buying their tickets. However, sectors supporting the OFWs’ plight said processing the refund will be a burden to the workers and would take time – precious time they would rather spend with the families. 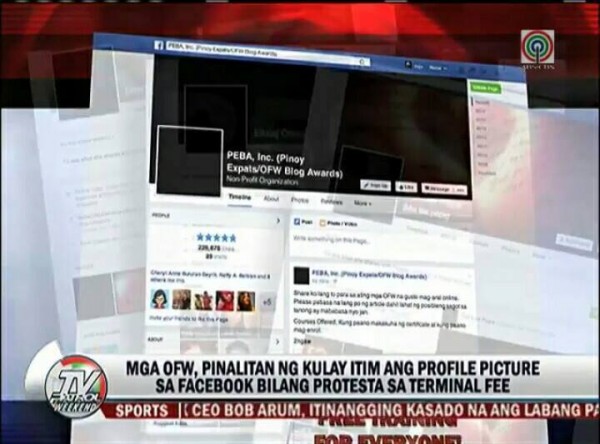 The integrated passenger service charge (IPSC) has been implemented on February 1, 2015, despite the OFWs continued protests. Thus, many OFWs changed their FB profile photos to black as a sign of protest and to show solidarity with the other OFWs as all of them will be affected by the integration.

Related: Where and How to Process the P550 Refund if Employers Pay for OFW Plane Tickets?

Aside from changing their FB profile photos, OFWs will be holding a peaceful rally on February 4. There will be a rally at Mendiola organized by OFW representatives in the Philippines.

Considering that many OFWs are in their respective jobs abroad, they won’t be able to physically join the Mendiola rally. So, PEBA [Pinoy Expats/OFW Blog Awards] will lead an online rally in solidarity with those going to Mendiola.

OFWs across the world are invited to join this peaceful rally – whether they go to Mendiola or do the protest online.