Home
Entertainment
Was the OFW Willing to Pay P20K for Someone to Get Her Pregnant Just Trolling?

It’s all over the web: the story of a certain OFW who posted on Facebook that she is willing to pay someone P20,000 so he would impregnate her. She does not care how many times they meet as long as he would get her pregnant.

There were several stipulations on her advertisement, including that the man should prove he is not sterile, that he should at least be someone good-looking or presentable, that he would only be paid when she gets pregnant, and that he should disappear from her life the deal is done. 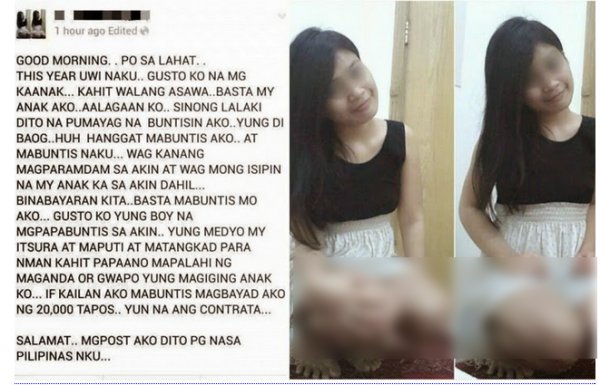 The ‘advertisement’ gained mixed reactions among netizens, with some even bemused and ready to offer their services in answer to the ad. Mostly, though, the people bashed her for taking such things too lightly and for even thinking about it.

A few days after her ad went viral, she took down the account.

We have reason to believe she was just trolling around, having fun with her Facebook friends, and trying to gauge their reactions if she made the ad – not expecting it would gain any attention outside her own circle of friends.

Now that she’s been the talk of town for days, she was perhaps shocked at the people’s reaction. Whether she was trolling or really serious about her ad, we now have no way of telling.

We do commend her, however, for trying to make light of what had happened. She did not curse the people who bashed her nor asked forgiveness from those she offended. There were still many haters posting comments on her page but she staunchly stood her ground and said the news about her was not true.