MANILA, Philippines- Amid heated debate on Marcos’ upcoming planned burial at the Libingan ng mga Bayani, Official Gazette of the Republic of the Philippines has been alleged of rewriting history and downplaying the Martial Law era under former President Ferdinand Marcos after posting a controversial caption on the photo of the late president on Sunday, September 11.

Social media users slammed the Philippine government’s communication channel’s post that was intended to be a tribute for the late strongman on his 99th birth anniversary. The last portion of the original caption earned the ire of netizens.

The caption read: “In 1972, he declared Martial Law to suppress a communist insurgency and secessionism in Mindanao. In 1986, Marcos stepped down from the presidency to avoid bloodshed during the uprising that came to be known as ‘People Power.’”

After amassing negative comments, the Facebook page omitted the phrase “to avoid bloodshed.”

Here’s a screenshot of the original and edited caption from Rappler. 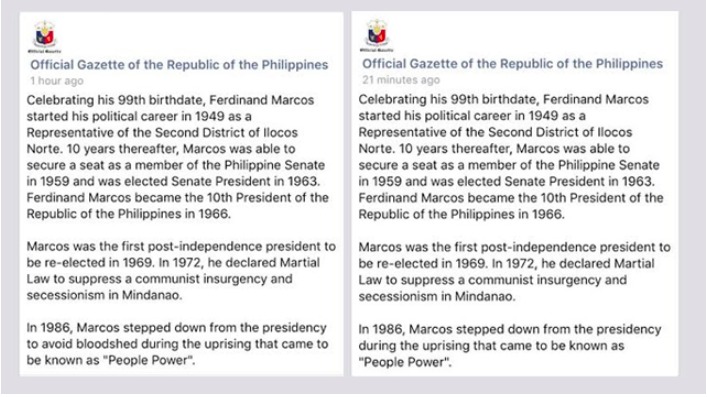 Although the caption was revised, the post continued to get negative comments as netizens accused the government of undervaluing rampant human rights abuses and corruption during Martial Law. This prompted The Official Gazette to take down the photo.

The Facebook page later reposted the same photo with a shorter caption that made no mention of the Martial Law and the 1986 People Power Revolution.

The post only stressed that Marcos was the “the longest-serving President of the country for almost 21 years.”

However, the new post didn’t escape the criticisms of irate social media users.

A certain Anj pessumal commented: “Did you really just erase any mention of Martial Law with this reupload? Do better, Communications team. You can’t fool us with your deleted posts and edits.”

“You guys forgot to mention why and how he became the longest-serving President of our country,” Rye Gaba-Del Carmen wrote.

On the early morning of Monday, September 12, the post’s caption was edited again, now mentioning the declaration of Martial Law in 1972 and Marcos’ exile to the the US at the height of People Power Revolution. It was also indicated in the post that he was succeeded by late President Corazon Aquino. 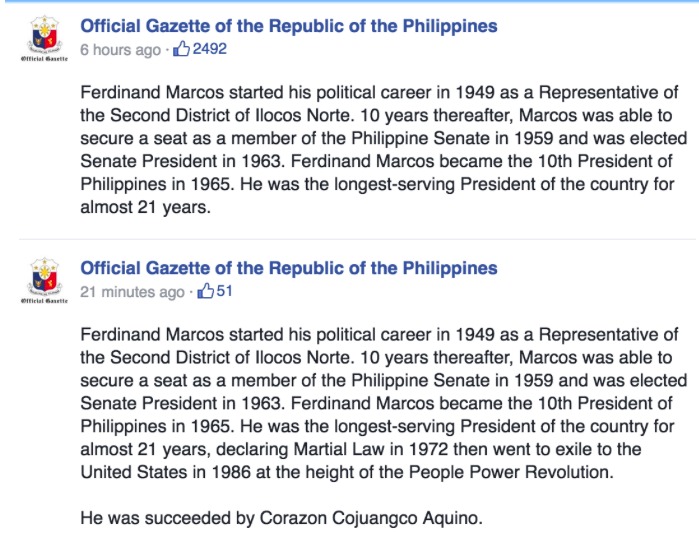 In a statement, Presidential Communications Office (PCO) Assistant Secretary Ramon Cualoping III maintained that The Official Gazette was not guilty of historical revisionism. It also denied having any “political color and affiliations”

“The Official Gazette of the Republic of the Philippines is the repository of government documents as stated by law. We are not in the business of revising history. We only convey what is documented in the official records.”

What happened during the Martial Law?