In a 30-second video clip uploaded on YouTube, Mendoza, a member of the Liberal Party, told the press that she will not allow political candidates to use North Cotabato for their political interests. 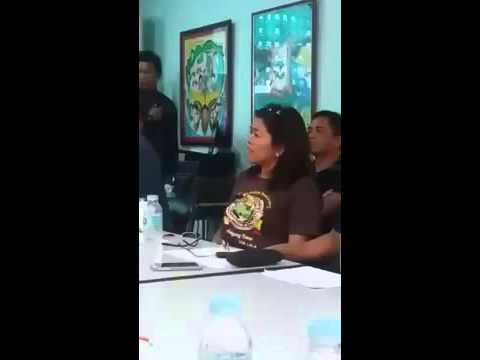 (Don’t turn North Cotabato into a staging ground for your propaganda in order to get help from the international community and collect money.)

According to several reports, Duterte was among the politicians Mendoza was pertaining to in her fiery statement. Duterte’s camp collected 30 sacks of rice from donors who had responded to the camp’s call for rice donations.

In response to Mendoza’s statement, Peter Laviña, head of Duterte’s Presidential campaign team said: “That is the statement of a guilty politician who isn’t able to perform her duties.”

The protest of about 5,000 El Niño-hit farmers in Kidapawan City seeking rice and financial subsidy from the government ended in a violent dispersal on Saturday, April 2 after the police started shooting. Three protesters were killed while 116 others were injured during the violent incident.

Kapamilya host and actor Robin Padilla has donated 200 sacks of rice to the farmers.

After ditching Vice President Jejomar Binay, One Cebu party led by the Garcias has chosen Davao City Mayor Rodrigo Duterte as choice for president. The party vowed to deliver one million votes for Duterte, reports Inquirer.

One Cebu gubernatorial candidate Winston Garcia made the announcement on Sunday, April 3.

“Cebuanos would do for Duterte what it did for 2004,” Garcia said.