MANILA, Philippines- Some branches of SM Cinema are allegedly giving priority to non-Metro Manila Film Festival (MMFF) movies like The Super Parental Guardians and Enteng Kabisote 10 and the Abangers instead of the movies which made it to this year’s list. 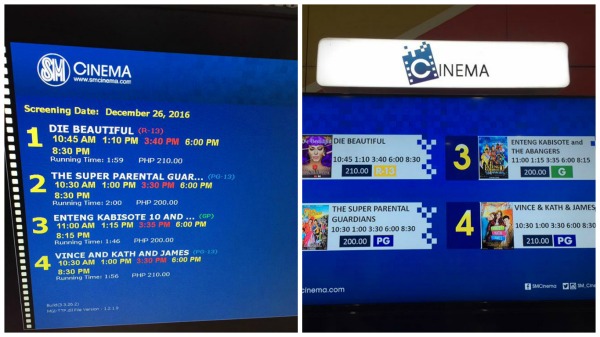 Several netizens are urging SM Cinema to give a chance to MMFF entries particularly quality independent films, that have a shot in international film festivals.

“SM Cinema You guys keep showing Parental Guardians and Enteng Kabisote during MMFF Time. Your killing the Philippine Film industry by not giving chance to other production. Invest on new opportunities, the Philippine Film can compete Globally! Give the Indie Films a chance,” a certain Katsuaki Furukawa wrote on Facebook.

Aloysius Mapalo wrote: “hope that SM Cinema Baguio will prioritize promoting art appreciation with the quality films of MMFF than the usual selfish lust for profit.”

Netizen Karen Alentajan expressed her disappointment on Facebook and wrote: “I’ve already seen ORO and Saving Sally. And I must say that these are a very good movies. Pinag-isipan, pinaghirapan at puno ng aral. Why don’t you give them place in cinema including the other entries in MMFF .”

On the other hand, some netizens commended SM Cinema in Trinoma, North Edsa, Fairview and Valenzuela for screening the official entries.

As of this writing, SM Cinema has not released a statement regarding the issue.

Last month, the screening committee of the annual festival made a huge change after selecting movies based on technical excellence, story, production values and other factors rather than star value. Usual movies with “box office magic” were not included in the list.

What is an independent film?

Also known as an indie film, an independent film is a feature film produced outside a major film studio system and is produced and distributed by independent entertainment agencies.

In most cases, independent films are produced with considerably lower budgets than mainstream films.