Considering she learned to swim at a rather ripe age of 82, Mieko Nagaoka is a fantastic example that you can’t really be too old to learn something new – then, excel in it!

At 100 years old, she became the first person over 100 to complete a 1,500-m freestyle swim in a 25-m pool. And that is not the only thing amazing in this feat: she was able to complete the swim for more than an hour and 15 minutes using just backstroke! I could not even swim backstroke for over a minute LOL.

Mieko is the best in her age group, holding a total of 24 titles over both short and long distances, as was awarded by the international swimming federation (FINA). She wants to continue swimming until she’s 105, if ever she is given the chance to live that long. Isn’t that incredible? 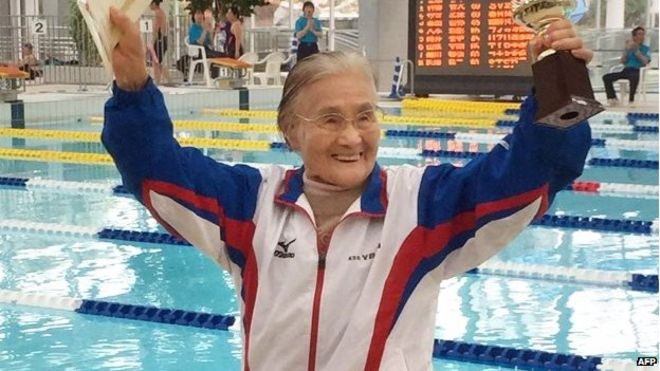 If you think Mieko has been swimming all her life, you are wrong. She only began learning how to swim when she was 82 as a form of therapy for her knees. Who would have thought the therapy sessions would turn into intense training sessions for a competition?

This old woman is definitely remarkable!

Swimming on freestyle stroke is often used synonymously to front crawl; however, when it comes to freestyle swimming competitions, the swimmers are allowed to use whatever style they are comfortable with. The real definition of freestyle swimming in layman’s terms is “any style”. For this reason, Mieko used backstroke all the way.

Most swimmers go a different route than what Mieko did, however, because the front crawl is definitely faster than the backstroke. It is possible, however, that Mieko finds the backstroke more energy-efficient, allowing her to relax while she is swimming.

The shortest freestyle swimming competition is for 50 meters while the longest is for 1500 meters, the event where Mieko participated in.