A Belgian philosophy student collaborated with photographer Florence Lecloux in a photoshoot aiming to help change society’s mindset about women and their bodies but instead of earning praise as she had expected, she gained a lot of bashers who slammed her for posting a ‘dirty’ photo of herself – because she had hairy armpits!

Laura De actually has a gorgeous face and a sexy body – her photoshoot would have gotten plenty of praise from netizens if she didn’t have hairy armpits but because she had a full bush of hair on her underarms, a lot of social media users felt they had the freedom to bash her for it.

What’s quite ironic is that Laura had posted the image because she believed that other people don’t have a say on what a person should or should not do with the hair in their body and their whole image. She feels that nobody has a say on such things except the person who owns the body – but the internet thinks otherwise.

It seems that everyone has an opinion about the matter and most of those who commented on her post blasted her for being dirty and unhygienic!

To date, the post has over 6,000 reactions and more than 7,000 comments; and the numbers keep rising.

Aside from the hate comments, Laura was also mocked on social media and her photo reposted many times on various pages, mocking her choice of keeping a bushy armpit.

Two weeks after her first post, she would post a similar snapshot that was captioned with a beautiful message on body confidence and equality. 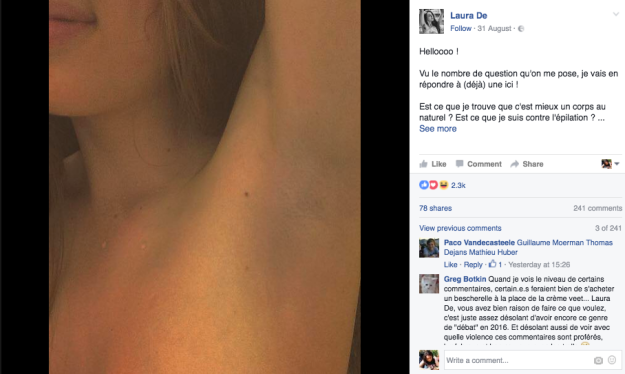 But she would soon cave in to the bashing as she later posted a photo of shaved armpits although she still had the last laugh as she captioned it, “My body, my choice.”

What are the Ways to Remove Hair?

There are many ways to remove hair from the body, including shaving, plucking, waxing, and through laser hair removal.