Vice President Jejomar Binay went to Ormoc City in Leyte to personally condole with the bereaved families of the MV Nirvana tragedy and meet with the survivors. Aside from providing them with ‘personal’ financial assistance, the vice president also handed out an unknown number of rosary bracelets.

According to the Inquirer, Binay confirmed that rosaries were given to some people and that he prayed with them. Some netizens also mentioned that they had received what now is dubbed as the “Binay Rosary” from the vice president during the Papal visit earlier this year.

The move appears to have been done in goodwill but it raised many eyebrows after a few recipients posted alleged photos of the rosary bracelets which were supposedly marked with a capital ‘B’ at the cross portion. Among the viral photos of the rosary was one posted by netizen “Kath Lin” on Facebook which dates back to March 11 and recently shared by Senyora Santibañez: 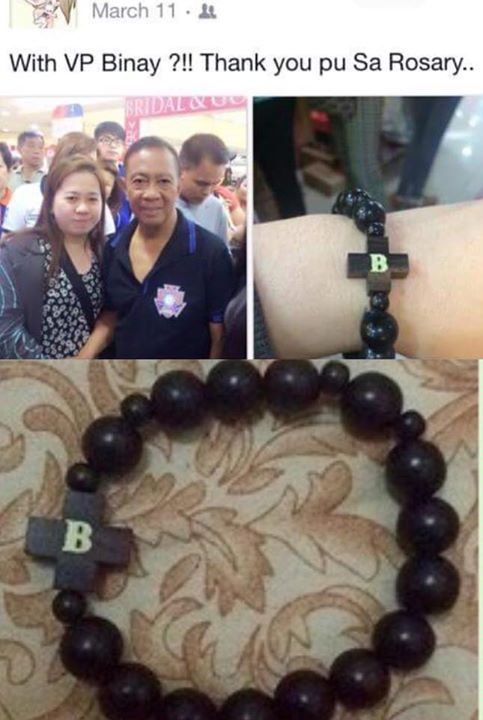 Does the ‘B’ really have a meaning or are netizens’ minds just prone to wild imaginings. Well, we can’t really blame the people as the Binays have been the subject of various controversies for several months now.

So, what does the ‘B’ stand for? Since the vice president did not say anything about the ‘B’, everyone had their own opinion as to what it actually stands for. Of course, the most popular notion is that the letter stands for ‘Binay’ but some ventured to provide a word for the letter in hopes that, quite possibly, the vice president had not meant to put his family’s initial in the rosary.

Some put forth suggestions such as ‘B’ might stand for ‘Blessed’ but others had more colorful words to use for what they believe is sacrilege to the sanctity of the holy rosary.

The rosary is a string of prayer beads used by Roman Catholics to count the component prayers, such as the “Hail Mary”.

A traditional rosary is composed of 5 decades, with each set or “decade” comprised of 10 Hail Marys. Each decade begins with the “Lord’s Prayer” and ends with one “Glory Be to the Father”. The “Mysteries of the Rosary” are announced in between cycles.

It is believed that praying the Rosary began with the concept that the Virgin Mary, here called as Our Lady of the Rosary, appeared to Saint Dominic in the year 1214 in the church of Prouille. This is the reason why the most common form of the rosary is called as the “Dominican rosary”.