In Nairobi, Kenya, there are lots of beggars – one of these is a boy named Little John Thuo, a street urchin. Every day, he goes to the streets to beg money from the better off people passing the streets where he lived.

One day, he knocked at a car to beg for money when the window opened to reveal a woman with a neck brace, Gladys Kamende. The obviously sick Kamende was hugging an oxygen tank she is connected to – without that tank, she would die.

Curious as to why this woman looked strange, Thuo asked her about it. Since she was trying to ask for support from the people, anyway, Thuo told the beggar boy about his story.

Touched by the fact that this woman may have money but she is in far worse condition than he is, Thuo cried hard and took the woman’s hand before loudly saying a prayer. It was a strange yet heartwarming sight to see on that road that people began to stop and look.

Kamende was touched by Thuo’s gesture and promised the boy she would come back for him when things get better for her. 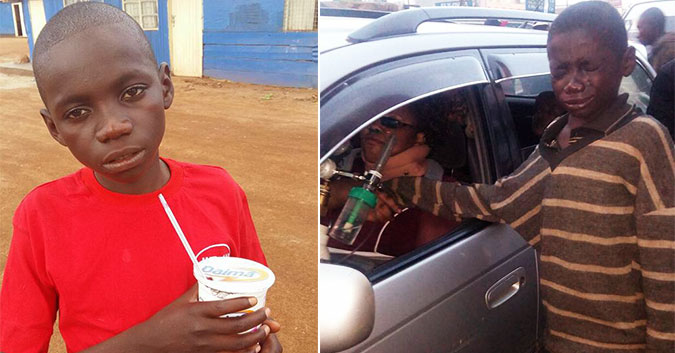 Someone took a photo of the boy and shared the story on social media where, as expected, it went viral.

When netizens learned that the orphan boy donated the 100 shillings (less than $1) he had collected from begging, they vowed to help out as well. After all, if this beggar boy was willing to literally give everything he had for the woman, it sure was a shame if richer people didn’t also help!

Now that she was better, she fulfilled her promise to Thuo and is currently making steps to have him legally adopted!

Kenya is a country in Africa; its capital is Nairobi. The country is well known for its wide areas devoted to wildlife habitats, including the “Big Five” game animals in Africa – the elephant, lion, buffalo, rhinoceros, and leopard.