A lot of agencies in the Philippine government take weeks, even months, to release the papers you need – and you don’t really have a choice because you have to go through them for these transactions as other agencies are also tasked to do other things. But one netizen received unusually fast service from one of these agencies – because he had the guts to show them the memo released by their own commissioner.

In a post that has since gone viral on Facebook, Alexander John Rico shared the story of how he went to an office of the Bureau of Internal Revenue (BIR) for his Certificate Authorizing Registration (CAR) and was told that he could get it after 3 months. The BIR staff told him that processing the CAR really takes a long time.

But a week after he had submitted all his documents, Rico went back to the BIR office to claim his CAR. The person who received his claim slip laughed upon seeing the date on his receipt, telling him that he had only passed his requirements a week ago and should wait for 3 months before he could receive the CAR.

At this point, Rico showed the BIR staff the following memo from Caesar R. Dulay, the Commissioner of Internal Revenue, pointing out that the memo says, “CARs shall be issued within five days from the submission of complete documentary requirements. Officials and employees found to be in violation of this directive shall be subject to the administrative and criminal penalties enumerated under RA 9845 otherwise as the Anti-Red Tape Act of 2007.” 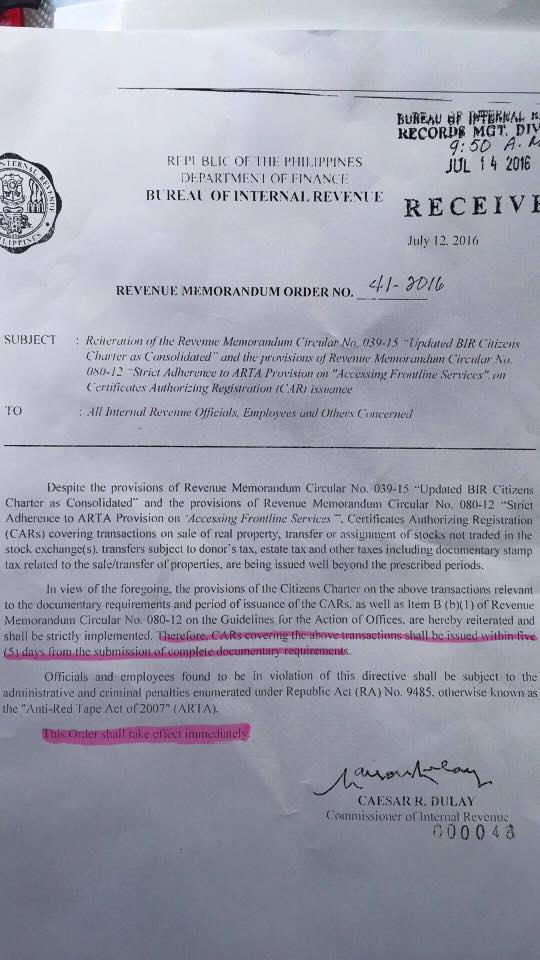 The effect of the memo on the BIR staff was immediate. The staff immediately asked for Rico’s claim slip to present inside the office; then, he was asked whether he was willing to wait until lunch time as they could produce his CAR by then. To this, Rico accepted graciously and told the staff he was certainly willing to wait.

In his post, Rico noted how things would have been different if Pres. Rodrigo Duterte wasn’t elected [since he was the one who mandated that red tape should be removed from government agencies]; however, Rico also advised those going to BIR and planning to present the same memo to do it calmly and not to get angry at the staff.