With gas prices rising everywhere, a lot of people are trying to find ways to save money on fuel. Many resort to buying from lesser known companies because these offer cheaper prices than the big time brands.

Sometimes, however, this might mean you are actually getting less fuel for your money because some unscrupulous gas attendants have mastered some clever ways to scam their unsuspecting customers. But the same could happen even in ‘branded’ gas stations.

A netizen who goes by the name Jahaziel Selosa Falla on Facebook shared one of these scams which he was able to uncover himself while getting gas for his vehicle.

According to Jahaziel, he bought gasoline for his vehicle at a gas station in Angono, Rizal when he noticed that the gas attendant did not return the nozzle properly. He took a photo of the nozzle to warn other motorists, particularly car owners of this type of scam.

Jahaziel insisted that he knows the proper way that a nozzle should be returned because he also works in a petroleum company. 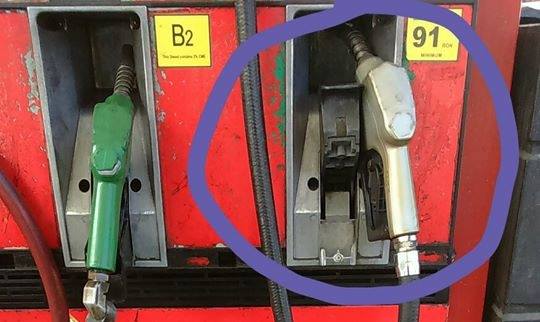 According to him, this is the way that the gas boys can cheat their customers because the number on the machine won’t return to zero; thus, the next customer who buys gas from this pump might see the amount he’s supposed to pay on the machine but didn’t know that he was getting less than what he had paid for.

For example, someone (usually a motorbike rider) buys gas for Php100. Because the gas attendant didn’t place the nozzle properly, the reading does not return to Php0. When a car owner buys gas for, say, Php1,000 and was distracted that he didn’t check that the pump reading didn’t start at 00, then this means that he paid Php1,000 but actually just got Php900 worth of gas!

That’s really bad, right? But Jahaziel was quick to add a disclaimer that this could happen to any gas station because it’s not really the company’s fault if there are just bad workers who are not afraid to cheat others of their hard-earned money.