Mankind has always been fascinated about the heavens and what mysteries the sky hold – and we’ve been trying to look for signs of life outside our planet. We’ve also been fascinated with stories about aliens and advanced civilizations in planets and galaxies far away from the Earth – but is there a grain of truth in these stories?

Recently, the National Aeronautics and Space Administration (NASA) headquarters in Washington made an exciting announcement about the discovery of a star system that had seven Earth-like planets, at least three of which are in the so-called habitable zone and might have all the conditions needed for life.

The planets also have roughly the same size as the Earth and are believed to be rocky. These planets might also have oceans and an atmosphere. 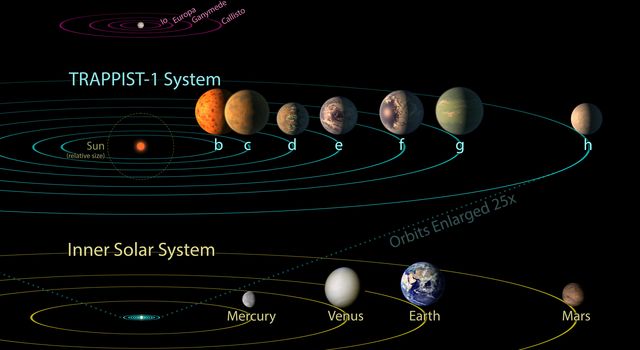 What’s so exciting about this discovery is that humans have always tried searching for the so-called “Goldilocks planet”, a planet whose conditions are similar to Earth for life to thrive – and this new star system has found seven of these planets orbiting around one star!

But this star system differs a lot from the solar system in so many ways. The ultracool dwarf star orbited by the planets is named the TRAPPIST-1 after the telescope TRAPPIST (TRAnsiting Planets and PlanetesImals Small Telescope) that was used to discover the star system.

Unlike our sun, TRAPPIST-1 is actually cool, dim, glows with red light, and about the tenth the mass of the sun – that means it is only about the size of Jupiter. But its planets still receive warmth because they are located so close to TRAPPIST-1 that their orbits are actually just a few days long!

The Earth takes 365 days to travel around the sun while Mercury has the shortest orbit of 88 days but the seven planets around TRAPPIST-1 are so close to it that the closest one revolves around it in 1 ½ Earth days while the sixth orbits in 13 days! The orbit of the farthest planet is still unknown but it is also just a few days long.

Also, while the sun and the moon are the only heavenly bodies we could clearly see from the Earth, TRAPPIST-1 and the other planets can all be seen from any given planet in the star system – and what a sight that must surely be! 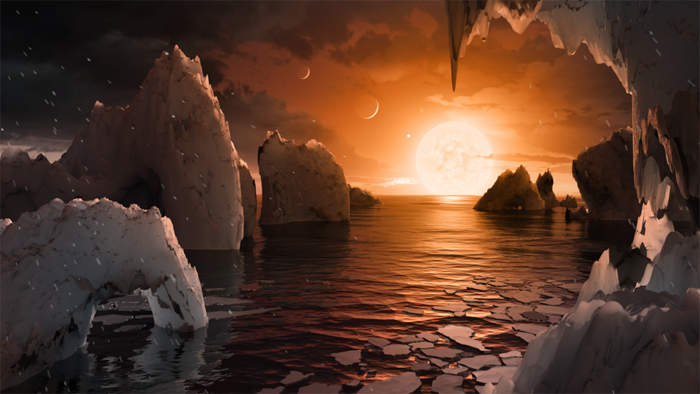 Artist rendition of the view from TRAPPIST-1f
Photo credit: NASA/JPL-Caltech

Excited now to visit these planets? I surely am!

The good news here is that the star system is only just 40 light years away from the Earth – pretty close, right? Well, the bad news is that “40 light years” might be small by astronomical standards but it really is so far by ours.

Remember that light travels at 186,282 miles per second in a vacuum; thus, it travels 5,874,589,152,000 miles per year. It would take millions of years before we could ever reach those planets but one could dream, right?