MANILA, Philippines – Members of the Philippine Army received Krispy Kreme donuts from a mystery man who introduced himself as Dexter Koh.

Philippine Army’s Civil-Military Operations Group’s Captain Gemira Dy shared a photo of soldiers holding boxes of the doughnuts given by Koh on her Facebook account. According to Dy, Koh approached some soldiers who were in queue at Krispy Kreme Bonifacio High Street and asked how many are there for the static display event for the Philippine Army’s 118th anniversary. After hearing that there were about 200 soldiers, Koh ordered doughnuts for everyone. 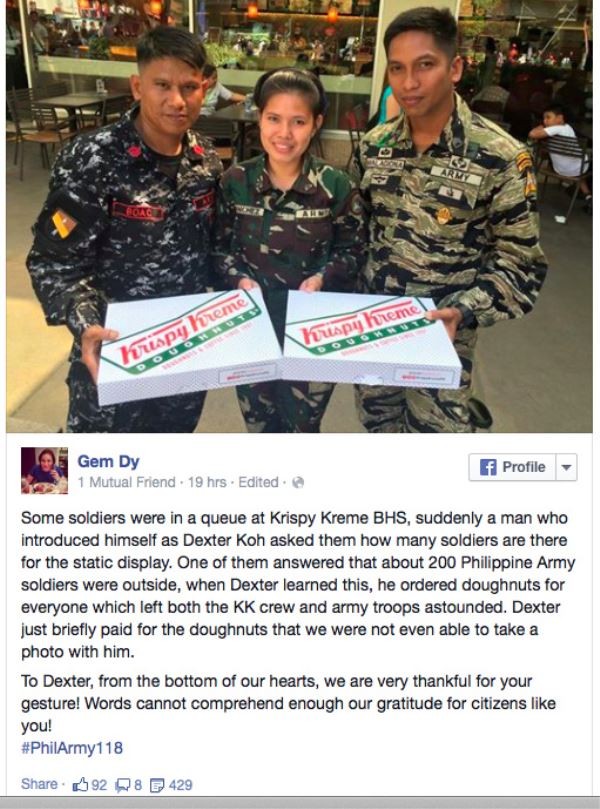 The mystery man just paid for the doughnuts and immediately left.

Dy said:  “To Dexter, from the bottom of our hearts, we are very thankful for your gesture! Words cannot comprehend enough our gratitude for citizens like you!”

A total of 12 boxes of Krispy Kreme doughnuts, which is valued at P395 per box, were given to the soldiers said Dy.

Reportedly, Koh was not there to purchase doughnuts for himself but to buy for the soldiers as observed by one of Dy’s colleagues.

He just entered when he saw the soldiers entering. He just went there to buy doughnuts for the soldiers.

Regarded as a popular dessert worldwide, doughnuts are deep-fried flour dough that are usually ring-shaped or without a hole.

In the Philippines, there are several brands of doughnuts being offered making it a popular dessert choice among Pinoys.