When a human-like creature the size of squirrel was found in Metepec, Mexico, it puzzled scientists as to what type of creature it is. After all, it does not resemble any known animal.

Its features are similar to that of a human being; though it is very small. Its back is curved and it has a long tail similar to that of rats. This creature also appears to look like a fetus because its skin did not appear to have hair or fur while its head looks like typical aliens you find in movies. 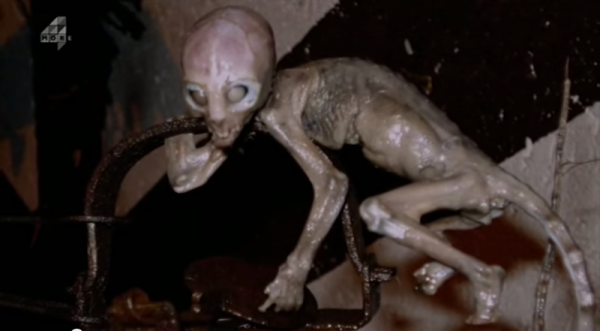 Scientists have long battled over how this creature should be categorized, especially because DNA results were inconclusive. Does that mean the Metepec creature is, in fact, an alien from some planet in the galaxy?

The people who found the creature said it gave them nightmares as its piercing scream haunted their dreams. They had to pour acid on the creature so it would die and give them some peace and quiet.

Several people claimed to have seen the creature alive – strengthening their claim that it was not an elaborate hoax.

Watch the hair-raising video about the Metepec creature here:

He said the man called Ángel Palacios Núñez, the so-called veterinary assistant featured in the video, is in fact Urso Moreno Ruíz, the nephew of notable taxidermist Mario Moreno.

Ruiz gleefully boasted how they were able to earn 300,000 Mexican pesos [U$23,000] for the creature when it was bought by a certain Maussán.

According to Franz, although Maussán knew the creature was something made from parts taken from several animals, the buyer posted the video on the web saying the creature was real. The elaborate hoax was supposedly created by Maussán, Ruiz, and Moreno.

However, according to a certain Roger Ainsley, he investigated the matter and went as far as calling the production team who worked on the History Channel Episode on Discover Channel. The team put him in touch with the people from Mexico and he discovered that the forum claiming the Metepec creature was an elaborate hoax was also a hoax itself.

A lot of people say they believe the mysterious creature is really just a hoax but many also think a cover-up is being done so we won’t ask more questions about the ‘alien’ creature.

So, who is telling the truth? Up to this point, it really is anybody’s guess because the scientists are as puzzled as we are. They still have not come up with the best explanation as to the correct identity of the Metepec creature despite years of research and extensive tests.