Although most were confused about what they were, the Manila International Airport Authority (MIAA) confirmed that the booths were installed as a preventive measure against the controversial “tanim-bala” scam that has plagued the said airport.

Vicente Guerzon Jr., senior assistant general manager of MIAA, said that these “last look” booths are installed to allow departing passengers to get rid of any questionable or prohibited items before they go through the security screening checkpoints. 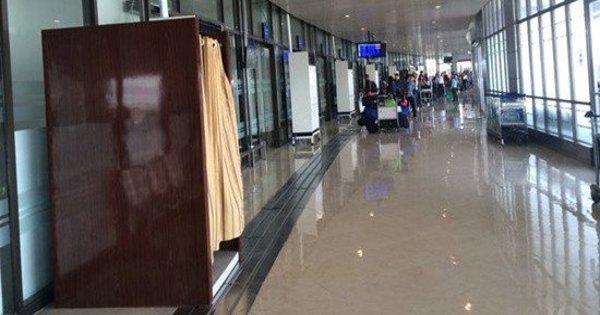 Most of the reported cases claimed that the confiscated bullets were planted by airport personnel for extortion attempts, such as in the case of American missionary Lane Michael White. However, some have also confirmed that there are passengers who intentionally bring bullets as a talisman or souvenir.

With these booths visible in the airport, people have the choice to leave the items behind with no questions asked. This applies to both the carry-on and checked luggage.

Recently, overseas Filipino workers have resorted to absurd solutions for the problem such as wrapping their luggage in plastic or putting a photo of tough-talking Davao City Mayor Rodrigo Duterte who threatened he’ll make culprits swallow bullets.

Still, the fact remains that most passengers and some airport personnel themselves are not exactly aware about the purpose of the booths. Several passengers remarked it was a fitting room while there were others who thought it was a Catholic confessional booth.

Inside the booths are tables that the passengers can use to unload any illegal item to wish to dispose in the bins and boxes. MIAA said they will soon be putting signs so that passengers can make the most of this security measure. Also, Guerzon noted that they are looking into the possibility of having interrogation rooms with audio and video recording features to ensure that both security and passengers are protected from false accusations.