While most religions and cultures practice monogamy, with those taking more than one wife or husband facing legal consequences for their actions, there are religions or groups that allow someone [more likely the man] to have more than one partner.

Muslims are among those who are allowed to take more than one wife; although the first wife has to give permission for the husband to take on more wives – and he should be able to afford not just the wedding but also raising a family with these many wives as well.

But one man in Wakiso district in Katabi, Uganda, decided to push the limits of the Muslim law when he married three ladies at the same time because he can’t afford separate weddings. 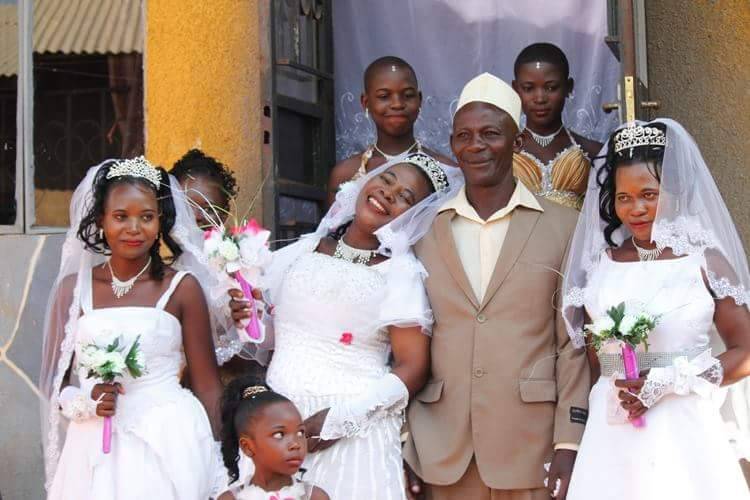 A food vendor in the town, 50-year-old Mohammed Ssemanda became a social media hit after netizens discovered photos of him marrying the three ladies in a single ceremony. Ssemanda admitted that he wasn’t rich and could not even afford a separate wedding for his wives but they are marrying him out of love, not money.

All his three wives were wearing white gowns, had tiaras holding the veil, and held nearly identical bouquets.

It was revealed that his 48-year-old bride Salmat Naluwugge was already his wife for 20 years but they decided she should also join the wedding ceremony, making it more of a marriage renewal for them.

But while most marriage renewal ceremonies are done to strengthen a couple’s love for each other, Ssemanda and Naluwugge were actually renewing theirs while the groom gets to add to his wives. Sigh. Strange arrangement, yes?

The ‘first couple’ has five children together. As for Ssemanda’s new wives, they are actually sisters – and have children of their own as well!

Meanwhile, his first wife also said she didn’t mind that her husband took two more wives at the same time, saying she was glad he included her in the ceremony as it meant he’s going to treat everyone fairly.