Many of us – motorists and passengers alike – have a few choice words to say about jeepney drivers, right?

More often than not, we hear complaints about their lot, especially when it comes to reckless driving and trying to get away from the responsibility even when they were at fault in an accident.

Such things could, of course, be attributed to other drivers but more so with jeepney drivers.

Thus, it is with great surprise to netizen Bernice Aspillaga (and to us!) that she experienced this rather surprising encounter with a jeepney driver after she met an accident.

Bernice admitted that it was her fault that the accident happened because she fell asleep on the wheel. Thankfully, even if her car and the jeepney she hit suffered damages, no one was hurt in the accident. 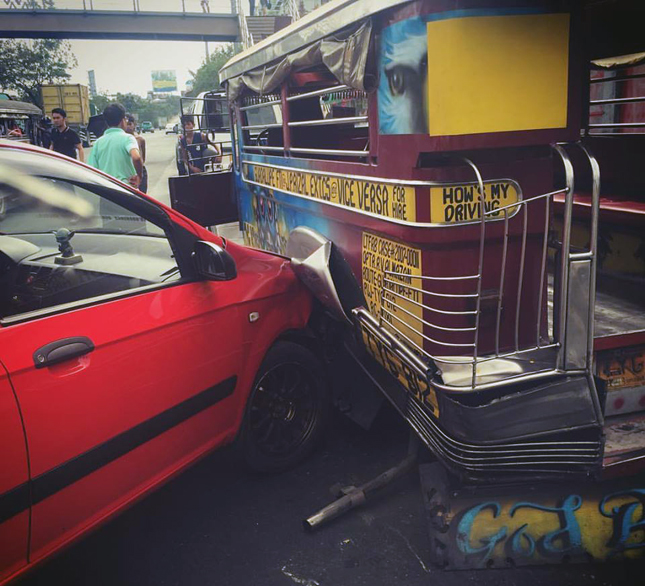 Instead of getting mad at her for hitting his jeep and keeping him out of work for a day or two perhaps, the guy, whose name was Flynn, was actually more concerned about her and assured her that the owner of the jeep was a kind, understanding man.

They settled the matter amicably, with Bernice giving the jeepney driver Php8,000 to cover possible costs but also exchanging mobile phone numbers so Flynn could contact her in case the money would not suffice.

Now, there would surely be a lot of people who would take advantage of the situation and ask Bernice for more money (possibly exceeding what was needed for repairs) yet this driver was something else.

The driver asked where they could meet so he could give her back the money – and even apologized for the inconvenience that might bring her! Bernice told the driver he could keep the money but when he sounded hesitant to accept it and handed the phone to the jeepney owner.

What a great guy. It certainly was a surprising story…

Here’s her full account as posted on Top Gear Philippines:

Last Friday, I had the unfortunate incident of ramming my car into a passenger jeepney. And why did I ram my car? I fell asleep. Yes, I know. Very, very stupid of me. And I vowed to myself that I would never ever do that again. I am okay. I was not hurt, and I did not hurt anyone. And I thank my guardian angel for that. But that’s not my story. The driver of the jeep that I rammed into is my story.

So when the accident happened, I woke up, disoriented and shocked to see my car hitting the back left side of a passenger jeep. The driver then calmly stepped out and asked me what had happened. I told him the truth. He then called the owner of the jeepney. Right then and there, he said: “Puntahan natin ang may-ari para maareglo natin ito. Huwag kang mag-alala, mabait yung may-ari.”

So we went and I spoke to the owner. The owner and I had a calm conversation, and I offered P8,000 right away for the damages I had caused. He thankfully accepted the money, and said he would be in touch if I needed to add more. I also gave a bit of cash to the driver for the hassle that I had caused him.

Last night, I got a text message from the driver. His name is Flynn, by the way. Flynn messaged me that there was P1,100 left from the P8,000 I had given them to repair their jeep. And that I could pick up the money anytime I was free. I had to read the message again to make sure I understood what he had sent. He even apologized for the hassle that this would cause me. I then called him up and said that it was okay–that he could keep the money. He sounded hesitant to accept the money, so he handed the phone over to the owner, Mr. Almasan. I told the owner that Flynn could have the money, and that it was no problem at all. The owner then thanked me and even asked about the condition of my car.

That message and conversation I had with them totally ‎made my day. It brought a ‎smile to my face and a warm feeling to my heart. This just goes to show that despite the ‎bad things happening around us, we can still find ‎kindness and ‎goodness in people.