A 30-year-old mother from Liverpool, England developed a strong urge to eat bricks, mortar, sand and soil while pregnant with her first baby.

Jenny Mason’s strange cravings began in March 2012 when she was three months pregnant with son Rylee Connor, who is now three years old. Apparently, she was watching a TV program about builders one night when she felt an intense appetite to eat bricks. 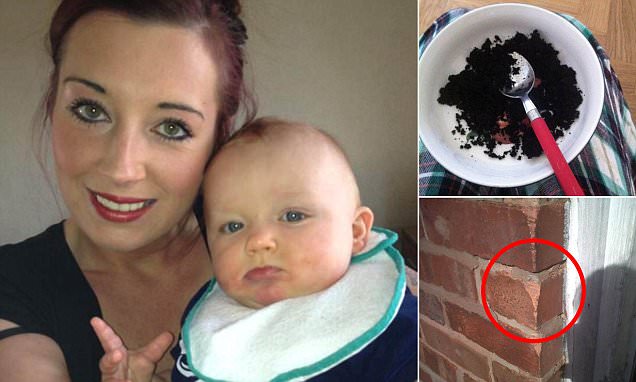 Mason soon found herself scraping off fragments of bricks in her house using a knife for her snack.

In her interview with THE DAILY MAIL UK, Mason revealed: “I’d use a knife or tools to carve bits of brick from the outside of the house to satisfy my cravings. I’d feel relief for a couple of days afterwards, and then the need to eat bricks, mortar, sand or soil would come back.”

Since she was embarrassed with her weird preference for food, she hid it from her 31-year-old partner, Stephen Connor. Because of this, Mason had to scrape off bricks while Stephen was at work or when he was sleeping.

However, when Connor noticed that the house was starting to crumble and threatened to call the landlord, Mason had no choice but make a confession.

After experiencing pain in her back teeth as well as constipation from swallowing bricks, sand and soil, Mason was encouraged by Connor to consult a dentist, who advised her to see a doctor. Soon, she was diagnosed with Pica, a condition wherein a person develops a compulsive urge to eat non-food items.

Worried about the health of her baby, Mason began spitting the objects she was eating right after chewing them when she was 6 months pregnant.

Three months after giving birth, her cravings magically vanished. But her family moved to a different house since then so she could  easily forget her strange affliction.