Morning show “Umagang Kay Ganda” earns the ire of netizens after labeling folk dancing as something done by the lower class, servants, or poor people. The episode was aired last November 3, 2016.

According to LionHearTV, during the segment, Ariel Ureta was talking about the accomplishments of “Dance Kids” champion Crazy Duo. While he was doing that, the show conveniently flashed short trivia about ballroom dancing on the screen.

For instance, it was revealed that the “ball” in “ballroom dancing” came from the term “ballere”, a Latin word which translates to “dance” in English. It was also mentioned that in the past, ballroom dancing is a social dance which was only for a few people, particularly the rich ones.

In contrast to ballroom dancing which was for the upper class, the show then defines folk dancing as something for the lower class, servants, or poor people. 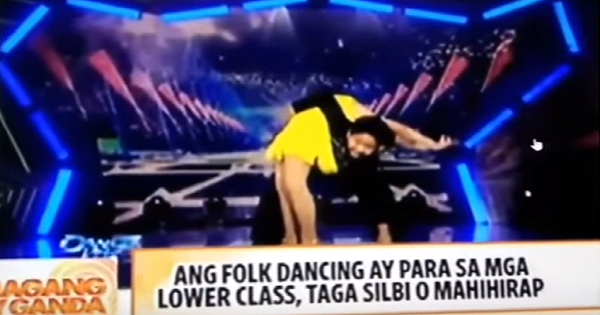 Screenshot from video by Viral Pinoy

Shocked netizens could not help but react over this ‘elitist’ and wrong definition of folk dancing. Many called the attention of the show, telling “Umagang Kay Ganda” that they should hire better researchers and that everyone should be educated about the truth: folk dancing is not “just for poor people” because it was even danced by the princesses and chieftains of long-ago tribes.

“Whooowwwww!!! What is this?! Does this TV station still knows the word Respect? Well obviously the one who is responsible for this definitely is poor in education and doesnt know his/her own identity. FYI!Folk dances are dances developed by groups of people that reflect the traditional life of the people of a certain country or region. It is from the people and therefore for the people. For everybody as folkdancing is a form of dance that bridges cultural understanding among different regions/country,” netizen Clarissa Reyes commented. “I seldom comment on post in FB but I just felt I need to say something. It pains me that there are Filipinos with such kind if mentality. Even living abroad we never let go of our own identity as a Filipino and always take part in the promotion of our culture thru Folk Dancing when given a chance and Ive always took pride about it. Hope that this be given much attention. Thanks Ching for Sharing.”

Considering that folk dancing is something that truly represents the Filipino people, the dance is not just popularly performed locally but even in international festivals and shows; thus, it is a great injustice for the morning show to call folk dancing as something that only the poor people do!

What is Folk Dancing?

It is, however, worthy of note that folk dancing is not just done in the Philippines! In fact, the term “folk dance” is defined on Wikipedia as “a dance developed by groups of people that reflect the traditional life of the people of a certain country or region.”

Folk dances in the Philippines include Pandanggo, Maglalatik, Tinikling, and Cariñosa.