MANILA, Philippines- Controversial personality and Duterte supporter Mocha Uson has become a trending topic after a certain post she made on Facebook made rounds on social media. 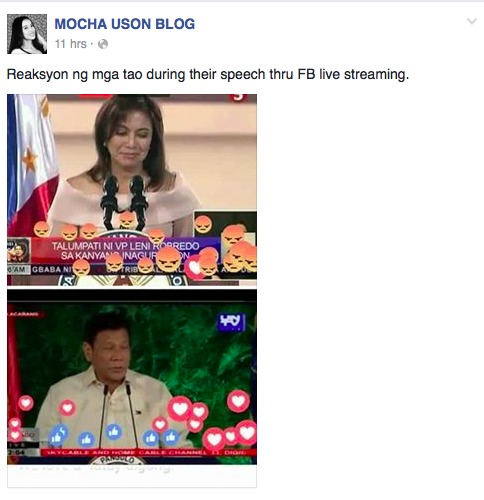 While several netizens agreed with Uson’s view, others claimed that Uson is inciting division and hatred through the viral post that has been shared more than 8,000 times as of this writing.

In one of the comments, a certain Jayce Jose urged Uson not to spread any form of hate and just support the elected Vice President.

Meanwhile, Facebook user Mond Saki said in her comment that Facebook is not the basis of the truth and not all voters are active on the social network.

Uson addressed her critics claiming she didn’t post it to bash Robredo. According to Uson, she simply wanted to reveal the truth which mainstream media fails to show.

(I just need to reveal the truth. Mainstream media does not show us the truth. It is only through FB that we will learn the real sentiments of Filipinos. If we will stop it, how will we know the truth?)

Born on May 7, 1982, Margaux “Mocha” Uson is a Filipino model and performer best known as the lead vocalist of the sexy group Mocha Girls. A staunch supporter of Duterte, Uson has amassed over 3 million followers on her Facebook page Mocha Uson Blog.