MANILA, Philippines- After her controversial Facebook post about vice president-elect Leni Robredo earned the ire of netizens, Mocha Uson, a die-hard supporter of incoming president Rodrigo Duterte has decided to clarify her statement.

In a lengthy Facebook post on Friday, May 27, the lead singer of Mocha Girls warned Robredo to give her support to Duterte or his supporters, particularly members of the DDS (Duterte Die-Hard Supporters), will have her removed from her office.

(Keep in mind that one of the reasons why Mayor Duterte won is because we are tired of traditional politicians like the ones in your party. We will be watching over you, madam VICE PRESIDENT LENI.) 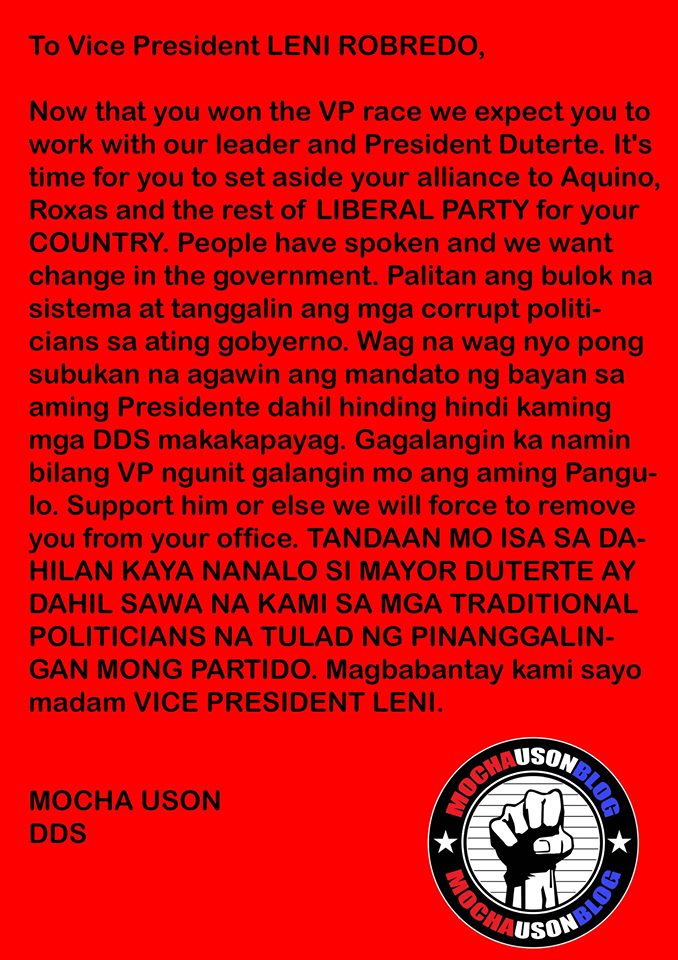 Uson’s post quickly spread like wildfire on social media amassing over 26,000 shares as of press time. While many netizens agreed on her opinion, several others lambasted the 34-year-old sexy singer for singling out the Camarines Sur representative.

Because of the comments she received from netizens, Uson decided to explain her side of the story.

Uson, who tagged supporters of Robredo as “yellow warriors”, said she is not a supporter of Robredo nor Sen. Ferdinand “Bongbong” Marcos, who finished second in the tight vice presidential race.

“I am NOT a supporter of BBM nor LENI because I still believe that CAYETANO is the best VP for Pres. DUTERTE.”

Emphasizing that her loyalty is with losing vice presidential contender Alan Peter Cayetano, Uson denied claims that she accused Robredo of cheating in the elections and having plan B.

(We will be watching over you. Don’t let your party LP use you as you are not an ordinary Congresswoman in your place,  you are the vice president of the Filipinos.)