MANILA, Philippines- We’ve read many interesting stories behind the success of board exam topnotchers, but Michael Prince del Rosario’s inspiring story is certainly one for the books.

A self-confessed Ragnarok addict in the past, del Rosario admitted that his studies greatly suffered because of his obsession with the online game. He became so absorbed in playing Ragnarok that he began skipping classes when he was in high school. As a result, he had to drop out of school. 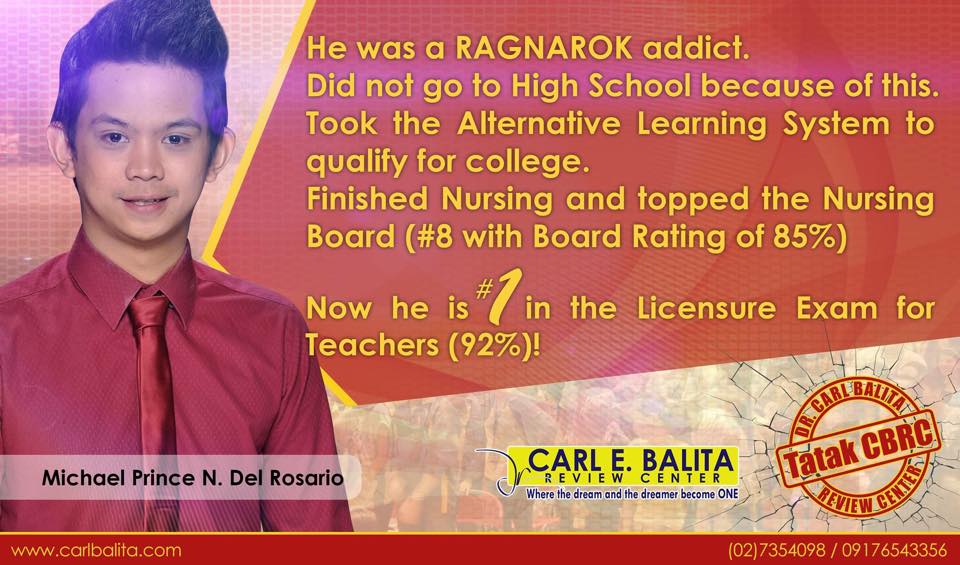 (I dropped out of school and I even hid this to my mother.)

Eventually, when del Rosario saw his batchmates were about to graduate and already planning for college, he realized he needed to turn his life around.

Through the Alternative Learning System (ALS), a program of the Department of Education (DepEd) that allows dropouts or out-of-school youths to earn diploma by passing a validation exam, del Rosario earned a high school diploma needed for college.

(If I can only turn back time, I’d choose to study for four years instead of taking ALS. It’s because high school life gives a different kind of experience. But I am thankful that I was able to turn my life around.)

In addition to topping the latest Licensure Exam for Teachers (LET) in the secondary level, del Rosario was also among the topnotchers of the 2010 Nursing Licensure Examination where he bagged the eight spot. Instead of working as a nurse, del Rosario currently teaches at a review centre since he feels that he is not yet ready to take responsibility for someone’s life.

In the near future, del Rosario plans to teach a science subject at a public provincial secondary school hoping to inspire the youth with his success story.