Duterte, who is now also a social media sensation, has become the inspiration for action mobile games applications. Duterte who is also known to be the “Dirty Harry” of the Philippines, fights crime by punching, kicking and even shooting criminals. Rody- Fight for Change, the newest game app among the four even features quotes Duterte mentioned during his campaign. 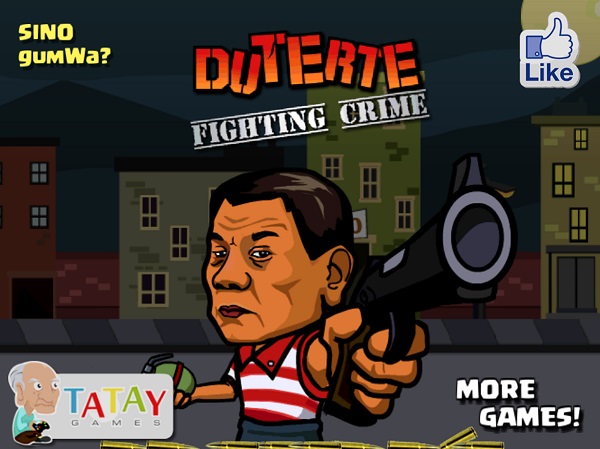 “Duterte Fighting Crime”, the most popular mobile game application among the four, has over 50,000 downloads as of this writing.
Photo Credit: Google Play

As of this writing, Duterte Fighting Crime now has over 50,000 downloads and Go Duterte has about 10,000. Rody- Fight for Change, which was only launched in March 2016 has 500 downloads.

Another mobile app game, Rody Shootout, however, is the least popular among the four mobile games with only 100 downloads since it was launched in March 2016. The mobile game apps can be downloaded on Google Play and Apple Store for free.

‘Rody Fight’ game developer Bari Silvestre said that he was not contacted by the Duterte camp to create the mobile app. He said that it was only created to support the crime-fighting mayor.

Duterte, not a womanizer, according to his common law wife

Contrary to how the public perceives Duterte, Cielito “Honeylet” Avancena, his common law wife, says Duterte is not a womanizer.

Dati ‘yun. Malapit talaga siya sa mga tao. Mapagbiro siya. (That was before. He is just close to the people. He likes joking.)

When Avancena was asked if Duterte was involved in the alleged killing of criminals in Davao City, she also clarified that Duterte is not involved in such allegations.