How much is your girlfriend? Definitely, most of you would answer “priceless!” Well, for one guy, his girlfriend was truly priceless so he sent her to a loan shark so he can pay off his debt! What a twisted guy! That’s not the way the term “priceless” works!

Thankfully, this was just a music video but what if it was true? It actually has plenty of similarities to movies and TV soaps that there is this possibility it is also happening in reality; though not really to that extent. Don’t you think so, too?

Tell us what you think about the video:

However, there are also instances when the role is reversed wherein it is the woman who deals physical pain on the man. Most of these cases, however, remain hushed up because the men involved are also afraid of their women as well as the stigma of being a hen-pecked, abused husband.

What happened in the video is a also form of domestic abuse, despite the crime not perpetuated directly by the boyfriend. After all, he was the one who sent the girl to the loan shark so he could pay off his huge debt!

What he is doing to her is also a form of emotional abuse. This is something that might be a bit harder to prove in court but could still land the man some jail sentence if he is proven guilty.

The topic of domestic abuse is a touchy issue that has hounded the world since the beginning of time. It is hard to understand why this can never be solved and might never ever be solved even if stricter laws and harsher punishments are implemented.

Anyway, if you’ve read about all the hoopla regarding the white and gold or black and blue dress, the Salvation Army found a way to use it as a compelling poster of domestic abuse. 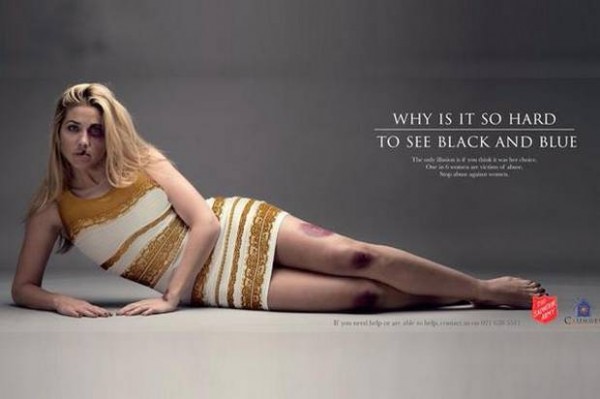