Cycling is a great form of exercise since it increases your cardiovascular fitness and protects you from diseases such as heart disease, cancer, obesity, mental illness, arthritis and diabetes. It’s a great way to combat health problems linked with a sedentary lifestyle.

One man took cycling to the next level by balancing 74 kg of stone on his head while cycling for about 10 km. The 52-year-old man named Zhang Xunmu has been doing the one-of-a-kind workout regimen every single day for the past 13 years. 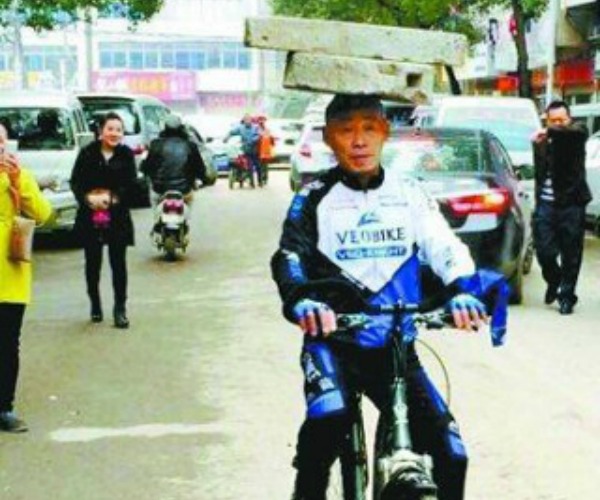 According to Xunmu, who performs his daily workout around Jiangxia Stadium, he started the unusual form of exercise in 2002 after spotting a millstone left at the roadside. Xunmu attempted to balance the large rock on his head and he found the activity rather amusing.

“At first, I just wanted to ride with these stones balanced on my head, but then I became obsessed with this way of working out,” Xunmu said.

Xunmu would balance the millstone weighing 34 kg and several other stones which are either 25 kg or 15 kg. Reportedly, the millstone never falls of.

In case you’re wondering if there is any drawback to this kind of exercise, Xunmu has apparently developed a bald patch because of the rocks.

Despite his age, a 55-year-old man from Sichuan in China has remained been fit and strong through the years. Apparently, his insane daily exercise routine which involves wearing of 70 kg of stone shoes every morning for over 30 years has kept him healthy.

The fitness freak known as Huang Baoquan  uses homemade stone dumbbells he attaches to his feet during his morning stroll which usually takes  around 200 meters.

“Every day I need to exercise with the shoes for at least one hour until I feel comfortable. Otherwise, I feel uneasy all over my body,” Baoquan told reporters.