According to a Facebook post by journalist James Deakin, Bathan accidentally scratched the Mazda CX5 while backing his car out of a spot in Frontera Verde Ortigas Ave on Tuesday, September 15 at around 10pm. Enraged by what happened, the unnamed driver taught Bathan a lesson by giving him a savage beating.

In one of his comments, Deakin claimed that some witnesses saw the driver use a steel pipe to attack Bathan. As a result, Bathan suffered serious head trauma leading to his death shortly after the attack.

As for the identity of the driver, Deakin said that several people who saw the incident were able to record the car’s conduction sticker. This gave Bathan’s family the opportunity to get the identity and address of the registered owner of the car and secure a hold departure holder. 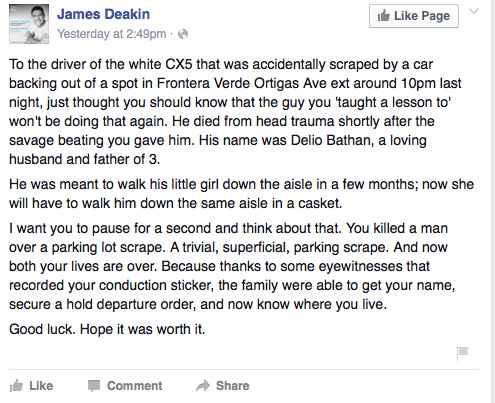 A recent post by Deakin revealed that the registered owner was under the name of the dealer who sold the car to the new owner.

“Angry as I am though, I didn’t divulge this as I do believe that no matter how heinous a crime may be, everyone should be considered innocent until proven guilty. Just as well. Because while the information has helped the NBI track down this killer, the registered owner turned out to be under the name of the dealer, who has since sold it to its new owner,” Deakin wrote on Facebook.

Who is James Deakin?

A multimedia motoring journalist, James Deakin is a recipient of the Henry Ford Award Hall of Fame.

Aside from covering motoring events, he also runs his own website, www.jamesdeakin.ph.