Sitting inside a bus for some 9 to 10 hours isn’t exactly the most fun thing to do but if you are traveling from Manila to Bicol in the Philippines, that’s something that you have to endure – regularly, if you actually live or work in these places. Thankfully, you don’t always have to just ‘endure’ the uncomfortable ride because there are options like the new ‘SkyBus’ offered by Isarog.

In a post that has since gone viral on social media, Magno Conag shared a number of photos taken in one of these buses – and we’ve got to admit that these buses truly looked luxurious! The seats looked wide and plush; and there’s even ample space to stretch your legs. 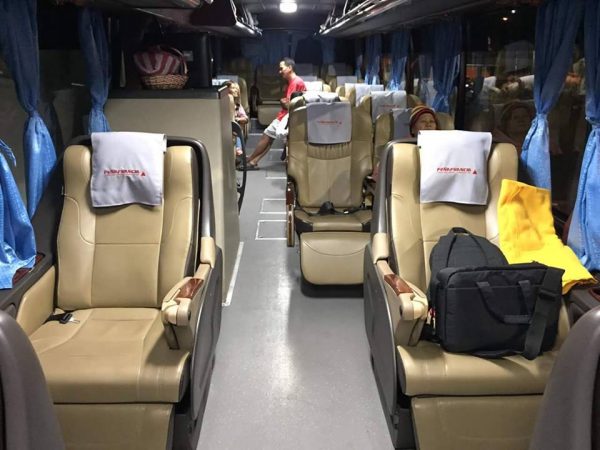 Moreover, the first few seats (the ‘solo’ seats) at the front area reportedly also come with massage! Now, that’s what you call extra comfort! I bet many people would willingly pay for those solo seats in the front portion of the skybus even if they actually cost more than the ones in the other rows.

In a blog post on When in Manila, the extra luxurious seats were revealed to be priced at around Php 1,800 while the other non-solo seats cost Php 1,100. While these prices are quite high, these still come cheap compared with plane fares which could cost travelers around Php 5,000.

Of course, there are still a lot of people who prefer the bus rather than the plane because even if the travel time differs by huge number [10 hours for bus to just around 30 to 45 minutes for plane], there is also a huge difference in the price tags.

We still haven’t tried these luxurious buses but we might do so in the future, if we get the chance to visit Bicol…

Bicol is a region located on the southeastern end of Luzon island; four of its six provinces are located on the Bicol peninsula while the other two are Masbate and Catanduanes, both of which are island provinces.