Family members of Davao blast victims have decided to speak up about the tragedy that took the lives of 14 people on the evening of Friday, September 2 at a popular night market along Roxas Avenue in the city.

Among them is the husband of a 28-year-old massage therapist named Maria Luz Arellano who died during the explosion. According to her husband, Arellano was beyond recognition when he found her remains in the morgue. Her eyes, feet and back were defaced by the explosion caused by an improvised explosive device. 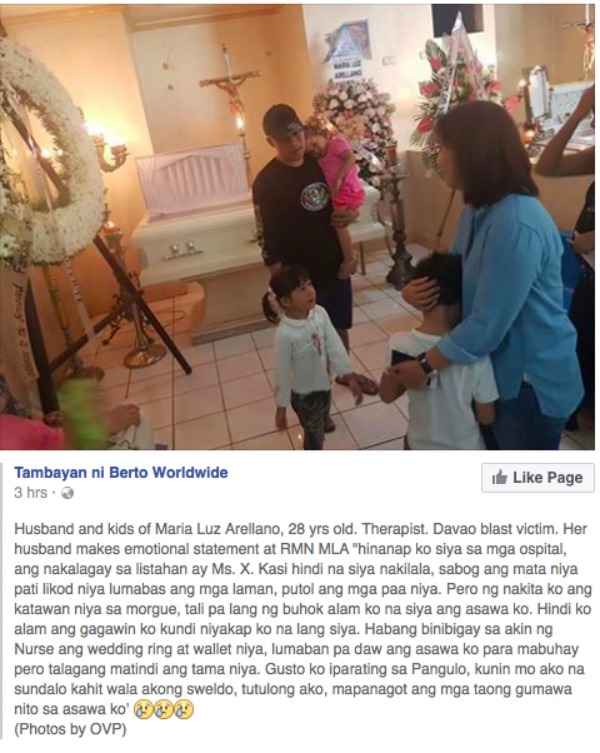 Through Arellano’s hair tie, her husband was able to determine her identity. A nurse later gave him Arellano’s belongings, including her wallet and wedding ring.

In a viral post on Facebook, Arellano’s husband urged President Rodrigo Duterte to get him as one of his soldiers, even without salary, so he could avenge his wife’s death.

Dennis Larida, the 45-year-old husband of Melanie and father of Deniel Josh, recounted how a late night stroll at Roxas Avenue turned into a nightmare.

In his interview with Inquirer, Larida said they were about to sleep when Melanie suggested that they visit the night market.

After walking the whole stretch of the avenue, Melanie spotted a massage parlor and decided to give it a try. Just a few minutes into the massage, the unthinkable happened.

Larida recounted: “The blast came from the first row, and it was in one direction only. I was seated in front of my son, and because I was not a customer, the chair they gave me was much lower, like the ones you normally use in the bathroom.”

He survived the incident as his son’s body appeared to have protected him from the shrapnel. Although Melanie and Deniel Josh were both rushed to the hospital, both died from the incident.

The Department of Health (DOH) has released P10 million to cover for the hospital expenses of the victims of the explosion in Davao City last week.

“I made an order to our finance people to release P10 million to the Southern Philippines Medical Center and to the regional health office in Davao to attend to the needs of the patients outside [the hospital],” said Health Secretary Paulyn Ubial.