Called as the “Pearl of Lao Tzu”, the current record holder for the world’s largest pearl weighs 6.4 kg and measures 9.4 inches in length – and this record has just been smashed by the appearance of a 34-kg pearl in Puerto Princesa, Palawan in the Philippines measuring 1 ft x 2 ft in size!

By the way, did you know that the Pearl of Lao Tzu was also found in Palawan?

Anyway, the new, still-unnamed pearl has been kept a family secret by a fisherman and his family for some 10 years or so. According to the fisherman, he was out fishing when the clam got stuck in his net. He was surprised to see the large pearl inside but decided to keep it a secret. 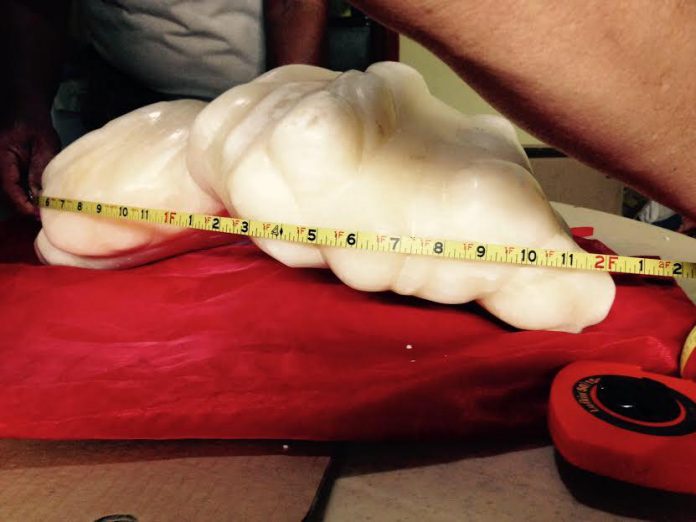 Perhaps he had no idea how much the value of this pearl is – or he would surely have surrendered it earlier. Considering that it is many times heavier and bigger than the Pearl of Lao Tzu which was estimated to have a value of over US$40 million (Php 1.86 billion), this could fetch the fishermen several billions more!

According to Reporter PH, the pearl is currently in the possession of the local government. They are working on getting this pearl recognized as the largest pearl in the world on the Guinness Book of World Records. City Tourism Officer Aileen Cynthia Amurao revealed that the fisherman refused to be identified.

Despite that, we hope that he will be given his share of the money should this pearl be bought by some museum – and we bet many museums would be willing to get their hands on this piece!

What is the Largest Pearl in the World?

The Pearl of Lao Tzu is the current holder of the title, “Largest Pearl in the World” on the Guinness Book of World Records; it weighs 6.4 kg and is 9.4 inches long.

It was previously called as the “Pearl of Allah” due to its turban-like shape and because it was discovered by a Muslim.