Netizens were left puzzled after photos of an unidentified woman wearing only her underwear while riding a subway in Shenzen Metro in China emerged online.

The photos, which were shared across various Chinese social media, quickly spread like wildfire online. According to a report by NetEase, the incident took place at the Shenzhen Window of the World Station on May 9. 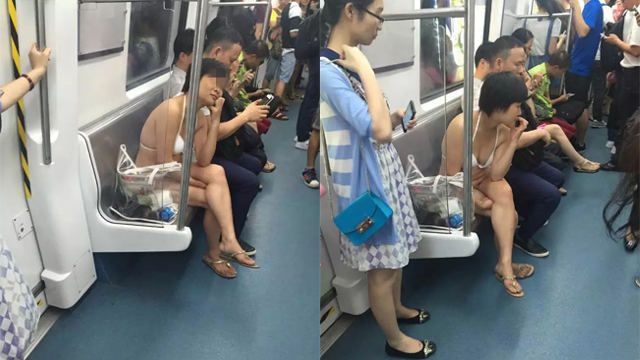 The woman, who was believed to be intoxicated, appeared to be unmindful of other passengers. Other subway users apparently gave the woman her space.

Reportedly, the woman got off after a few stops.

While many believe that the woman was not in the right mind when she decided not to wear anything other than her underwear, some pointed out that the woman probably thought it was ‘No Pants Subway Ride’ day.

Still, no one really knew the woman’s real motive behind the strange act.

What is ‘No Pants Subway Ride’?

In 2002,7 bottomless members of the group Improv Everywhere, a New York City-based prank collective, took the train in New York City in what was dubbed as the ‘No Pants Subway Ride’.

More than 10 years since the event, around 60 countries such as The UK, Germany, and Czech Republic strip down to participate in the annual staged event every January. To date, the event has become an international celebration of silliness.

According Improv Everywhere’s website, the goal of the ride is to make other people smile while participants act as if everything is completely normal.

“The idea behind No Pants is simple: Random passengers board a subway car at separate stops in the middle of winter without pants. The participants behave as if they do not know each other, and they all wear winter coats, hats, scarves, and gloves. The only unusual thing is their lack of pants,” the website reads.