Do you think a person’s sexual orientation influences his or her ability to accomplish a job?

Apparently, the answer is yes for a mother who refused to have a gay instructor teach drama to her children.

According to Michael Neri, a 26-year-old drama teacher of the Talking Props Theatre School, one mother didn’t allow her children to take his classes after learning that he’s gay.

Neri’s lifestyle, which apparently didn’t match the mother’s Christian beliefs, prompted the stuck-up parent to withdraw her kids from his class.

Hurt by what the mother told him, Neri opted to take the high road and educate the woman about her “belief”. His response was truly epic.

Here’s a photo of their conversation which has gone viral on Facebook. 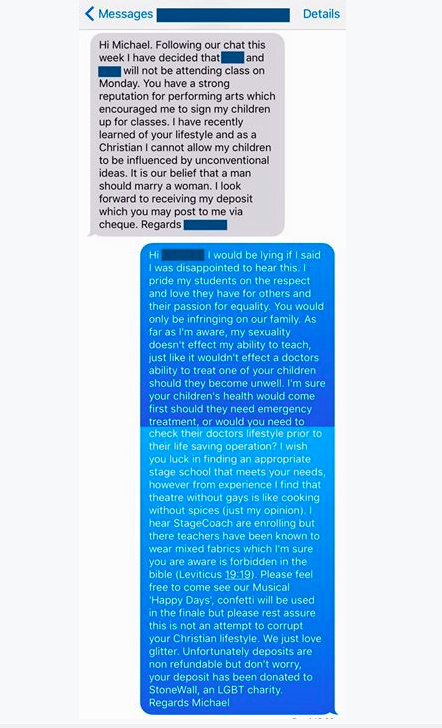 In an interview with METRO, Neri revealed: “I didn’t want to upset anyone, but I needed to protect myself and my organisation, so I thought I would reply in a polite manner.”

The renowned dancer even told Metro that the children are more than welcome to attend his classes should the mother change her mind.

According to the US Center for Disease Control and Prevention, discrimination against gay, bisexual and males who have sex with other males has a negative effect on their physical and mental health.

Among gay discrimination’s common effects on health include: