MANILA, Philippines-To prove that crime rates have declined under the government of President Rodrigo Duterte, Senator Alan Peter Cayetano presented a data showing the number of murders and homicides during the Aquino and Duterte administrations during a Senate inquiry on alleged extrajudicial killings related to anti-illegal drugs operations.

Cayetano, in his opening speech, revealed that there were 35 killings each day under the Aquino administration, while there are 20 under Duterte’s. 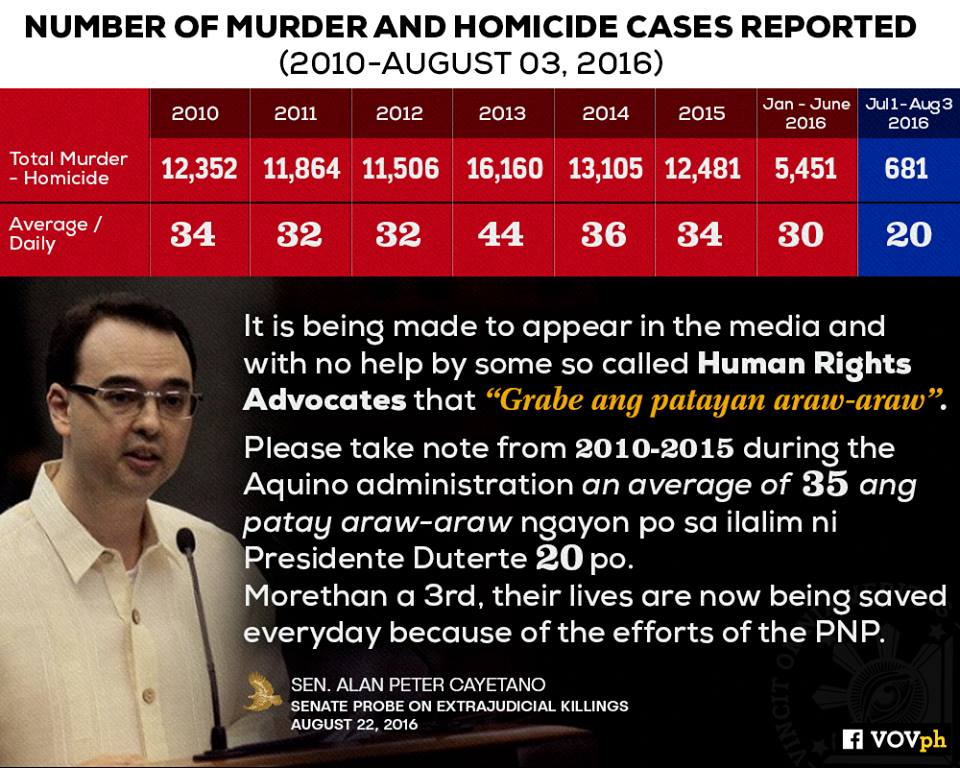 “It is being made to appear in the media and with no help by some so called human rights advocates that “grabe ang patayan araw-araw” please take note from 2010-2015 during the Aquino administration an average of 35 ang patay araw-araw ngayon po sa ilalim ni Presidente Duterte 20 po. More than a 3rd, their lives are now being saved everyday because of the efforts of the PNP,” said Cayetano, the former runningmate of Duterte.

The Senate Inquiry headed by Sen. Leila de Lima looked into the growing number of summary executions of suspected drug personalities in the country. De Lima, who is currently involved in a word war with the President after the latter accused her of allowing corruption inside the National Bilibid Prison, said she wants to know how many deaths were caused by legitimate police operations and how many were committed by so-called vigilantes.

“There is no denying the fact that this is a very important issue of public interest and national importance, and this is something bigger than Sen. Leila De Lima,” the former Justice secretary told CNN Philippines.

What is the definition of extrajudicial killings in the Philippines?

Under the A.O. 35 Operational definition of extrajudicial killings, these types of killings occur when the victim is a member, advocate or affiliated with a politicial, labor, agrarian, or environmental organizations. The victim can also be media practitioner or a person apparently mistaken or identified to be so.

The said AO was also signed by then Justice Secretary De Lima.