The photos show building at the Manila Police District (MPD) and a mobile police car apparently vandalized by the rallyists prior to the violent dispersal which injured at least 50 people. According to BuhayLespu, the leftists, who were protesting against foreign intervention in support of the Duterte administration’s independent foreign policy, were the first to attack the police and damage government properties.

In several videos of the incident that emerged online, the driver of the said mobile police car, PO3 Franklin Kho, was seen repeatedly ramming into protesters as the vehicle wildly moved back and forth. A number of people were run over but managed to stand up.

The MPD claimed that Kho didn’t deliberately run over the protesters and was simply defending himself. 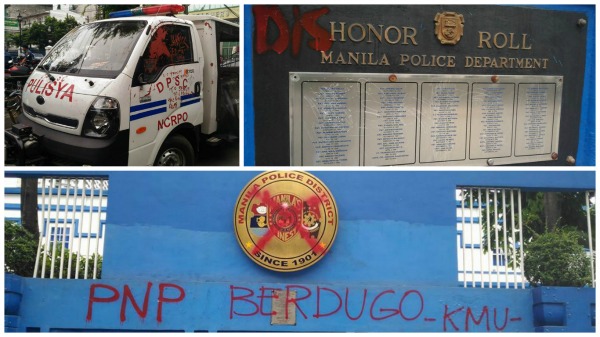 BuhayLespu supported MPD’s claim saying that the driver was left without a choice but to do what he did as the protesters were ravaging and trying to seize the mobile police car.

No Justification for Violent Dispersal

Still, protest leader and Bagong Alyansang Makabayan (Bayan) secretary general Renato Reyes said there is no justification for the violent dispersal of about 1,000 protesters.

“Even as the president vowed an independent foreign policy, Philippine police forces still act as running dogs of the US,” Reyes said.

According to Reyes, the violence only began when MPD official Col. Marcelino Pedrozo arrived in the protest area and ordered policemen to disperse the protesters.

Pedrozo, Kho and 7 other officers were relieved from their post following the incident.