A 56-year-old Korean woman threw almost 22 million won ($19,030) worth of cash in Seoul Square on Monday, March 21. However, passersby just chose to ignore the free cash.

A report by the Korea Herald revealed that the woman apparently withdrew 42 million won ($35, 910) from the bank days before the incident. The woman, who feared that her former husband and son would try to take all her money from her, decided to throw hundreds of 1,000 won-, 5,000 won- and 10,000 won-bank notes on the streets of Seoul’s business district. She reportedly hired a bodyguard to accompany and help her scatter the bills. 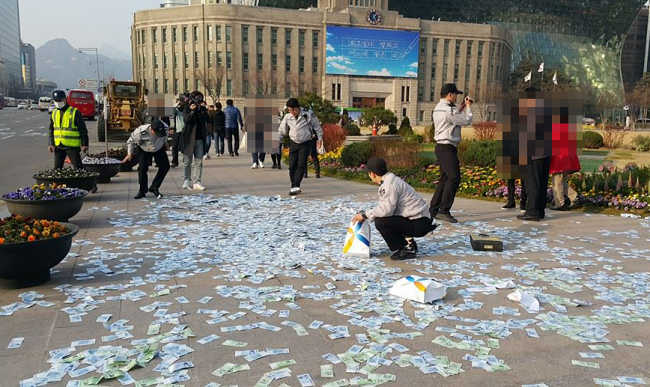 Surprisingly, the incident didn’t cause any commotion in the area as passersby didn’t pick up the scattered bills on the concrete. Except for some people who stopped to take a look and capture photos of the scene, almost everyone in the area didn’t show interest in the whopping amount of money.

According to the Korea Herald, a law prohibiting people from picking up unattended cash has caused the bizarre behavior of the passersby. However, the woman in the incident “had intended to give up her rights to the money, so there was no legal basis to punish those who gathered the bills.”

Man Arrested after Throwing Money from the Sunroof of His Car

A 34-year-old Korean man surnamed “A” was arrested after throwing money from the sunroof of his car in Gwangalli bridge in Busan, South Korea, reports Busanhaps.

The unemployed money thrower reportedly did the strange act because he wanted to “gain attention from society”. Unfortunately, his seemingly charitable act caused traffic jam on the upper level of the bridge for five minutes as passengers got out of their cars to pick up and collect the cash.

According to authorities, people who picked up the money had no legal obligations to return it.