Babies being abandoned in various places including garbage cans is nothing strange in the Philippines. Unfortunately, some mothers resort to throwing away their precious gift from above as they have no means to support their child.

But every once in a while, these babies get a second chance in life after random strangers with a big heart rescue them. Take for instance the case of baby Jade, who was found inside the trash can of Bam Siao Lim on Thursday, August 25. 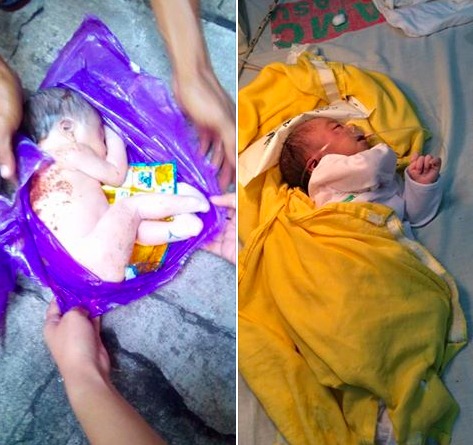 Based on Lim’s Facebook post, baby Jade’s umbilical cord was still attached to her when a garbage collector found her inside a trash can in her residence in Valenzuela, Philippines. As seen on the photo shared by Lim, the newborn baby was lying on a carton naked and exposed to dirt and other trash when she was discovered.

Lim decided to rush baby Jade to Valenzuela General Hospital. Luckily, the baby made it to the emergency room where doctors gave her immediate medical attention. Department of Social Welfare and Development staff and police officers also came to check on baby Jade.

Initially, Lim received donations as her family was paying for baby Jade’s hospital expenses. Fortunately, the news reached Valenzuela Mayor Rex Gatchalian, who offered to take care of everything.

“The doctors said she needs to undergo cranial utz. They are suspecting cranial hemorrhage. (maybe due to the way the baby was thrown inside the garbage can). The Doctors at Valenzuela General Hospital will do everything to save the baby,” Lim wrote in her latest update.

In her post, Lim, who suffered five miscarriages, asked the mother of baby Jade not to “throw” an angel in case she gets pregnant again.

“It broke my heart to see your baby in such condition. We, ( bryan and i) as a couple had a hard time conceiving. I had 7 pregnancies. 5 of them i miscarry ( 1 twin ) only 2 make it to full term ( not really fullterm, 36w5d) bea and ben.

How many children are abandoned in the Philippines?

According to the United Nations’ Children’s Rights & Emergency Relief Organization, there are approximately 1.8 million abandoned children in the Philippines, accounting for more than 1% of the entire population.