A lovesick man from Yichang City, China, attempted to execute the most epic marriage proposal by parachuting down to his girlfriend.

Despite his elaborate plan and efforts to woo his girlfriend, the man miserably failed after his parachute got entangled in a tree on May 21. Adding insult to the injury, his girlfriend even turned down his proposal. 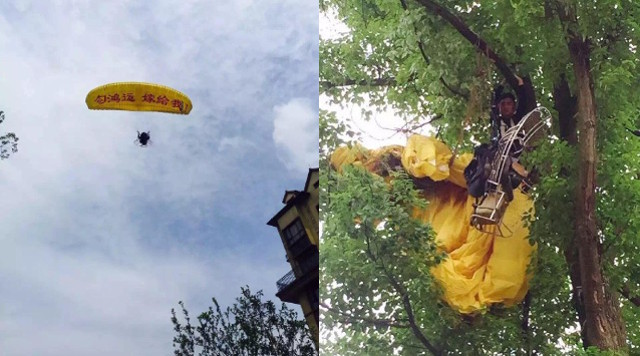 According to reports, the unnamed man hired a parachute with the words “Gou Hongyun, marry me!” printed on one side. Everything was going according to his plan until a gust of wind caught him and blew him into a tree.

Unfortunately, he got stuck in the branches of the tree for almost an hour. Firefighters had to bring a crane in order to rescue and bring him down.

Since he wasn’t injured in the incident, he tried to continue his proposal plan once he was back on the ground. Handing his girlfriend a bouquet of flowers, the man got down on one knee to pop the question.

Apparently, the accident was a premonition of the things that would happen next. Instead of saying yes to the man, the girlfriend refused to answer his question and walked away from the scene.

Just like other over the top proposals, the man’s parachute proposal was highly discussed online.

Many users on ifeng.com commented that the man’s proposal lacked sincerity .

“You should be rejected! You should have a sincere proposal with an emotional foundation. Rather than high profile attention,” wrote one user.

In 2011, a United States Air Force Academy cadet named Eric Wallace proposed to his girlfriend, Melanie in front of a packed stadium before an Air Force football game.

Wallace jumped out of the plane, parachuted down to the fifty yard line and asked his girlfriend the magic question. Luckily, he got the answer he wanted.